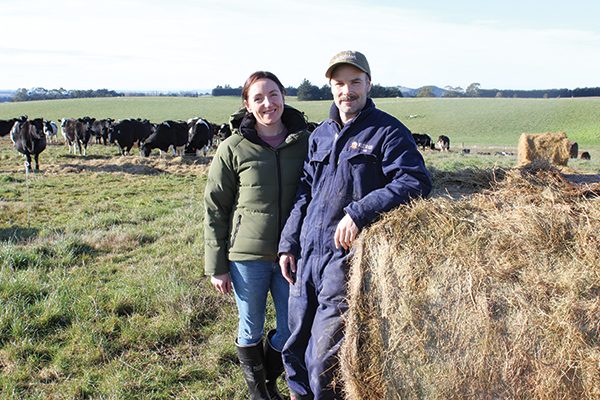 Mark and Madeline Anderson now spend about the same amount of money buying hay for winter bale grazing that they used to spend on growing winter crop. The 690-cow, once-a-day farm near Clinton in South Otago used to winter conventionally on swedes and kale, switching to fodder beet and then mixed species crops.

But for the past three years they have been transitioning to hay bale grazing on long grass covers with this winter being the first they haven’t had winter crop on bare soil.

And the results speak for themselves.

Paddocks aren’t pugged, cows have clean coats and are not wandering up and down the break, costs are down and earthworm numbers are up.

“About 7.5km of our boundary is the Waiwera South River and we knew we were losing sediment into it every winter with winter cropping and through the process of re-grassing,” Mark said.

“It’s a stony river and the council’s water testing was showing the numbers of macroinvertebrates were declining rapidly due to sediment loading.

“The paddocks after winter cropping needed full tillage because of the soil compaction and pugging to get them back into grass so we were losing our soil structure every time we did that.

“After spending many childhood days roaming the length of the river, and now doing the same with our own children we were seeing the effects.”

As well, they bought neighbouring land which had been growing cereals for years and was worn out plus for two years they had end-on-end extended dry spells.

So they started looking for a different way of doing things.

“We were forced into it the first year,” Madeline said. “Because of the extended dry, the winter crop hadn’t grown as much as we needed it to so at the last minute we bought hay and fed it out on grass and it worked.”

Making hay while the cows feed

They now make about 500 round bales of hay and buy another 2000 in from local farmers.

The bales are placed out on 60ha after each paddock’s last grazing for milking.

Cows are dried off at the end of May with body condition scores ranging between 4.5 and 6.

Split into mobs of 100, they go into three-day breaks of 4000kg DM/ha cover on 4000sq metres with about 14 round bales of hay which equates to 18kg DM/cow/day depending on the hay and pasture composition.

“The covers are high on these paddocks and we could have had another milking off them in the autumn,” Mark said.

“But at least they haven’t been out of the ground all season which they would have been if they were growing fodder beet.”

Bales are left on their sides so they don’t absorb as much moisture.

There are no bale feeders to roll around the paddock but the plastic netting still has to be cut from each bale before the cows are let into the break.

“We cut the wrapping right at the ground level and then you only have to roll it a little way over to get the rest of it,” Madeline said.

Portable water troughs are used and most of the pugging that does occur is around them.

“We try and put hay around the troughs to stop it as much as possible.”

The cows are back fenced so they only have the three-day break unless wet weather threatens and then they are allowed more space to move around. Resulting covers are about 1500kg DM/ha.

“It’s their hoof action that we rely on to break down what they don’t eat to put it into the soil.

“In late spring, where the bale was, the soil is a degree warmer than the rest of the paddock and that is because of the hay composting down.

“Most of it is gone by early summer.”

A year later it is easy to see where the bales were. Clumps of thick, dense, shiny green grass are everywhere with sparse grass in between.

“We’re getting a lot of seed from the hay as well. Timothy, plantain and red clover, so that is giving us a diverse mix of plant species in the paddocks.

“We focus on buying quality hay.”

“Weeds are not an issue. That’s a summer grazing issue. Overgrazing will promote bare soil and that’s where weeds fill that niche.”

Cows are calved on bark and sawdust pads with silage so it’s easier to pick up calves with the planned start of calving on August 15.

By October, the paddocks which were bale grazed through the winter are back in the milking round without a seed drill or discs required.

“I actually sold most of my tillage gear just so I’m not tempted,” Mark said.

Besides contented cows and staff not having to shift fences every morning through winter in the mud, the real winner is the soil.

“We wanted to increase our resilience in the summer dry patches. If we can hold more water in our soils through increased carbon and roots reaching down deeper then we can hold on for longer.

“Our organic matter in our soil is increasing as well as our fungi. Too much of our dairying soils are bacteria driven and the fungi is needed too. It’s the fungi that produce the glue that keeps the soil structure.

“The last test showed our soil organic matter had increased by 2% over three years which is impressive.

“That’s just not from the bale grazing, we do mob grazing during the summer with high covers.”

Integrity Soils has been analysing the soil on the farm for the past three years and is finding increasing root depths (down to 400mm), higher water infiltration rates and pastures have increasing brix (nutrient) levels.

About 85 worms are found in each spade full of soil which equates to four tonnes per hectare.

“We’re farming more worms by weight in the soil than cows on top of the soil which is pretty mind blowing.”

They’re also seeing less animal health problems and fatter cows. Transitioning on and off crops is now a thing of the past.

This year they also haven’t used dry cow therapy hoping the lack of mud through winter will see them through with no increased mastitis problems.

Young stock are wintered on a pad with silage but Mark and Madeline are thinking of trying them with bale feeding next year too.

The aim for the Andersons is to make more of the hay onfarm and further decrease cow numbers, making the farm a closed, circular unit.

“At the moment we are importing fertility and carbon from other farms, we know that, and the aim is to be self-sufficient.”

They had hoped for per cow production to be at 370kg MS/cow for the past season but the long late summer dry saw them only reaching 345kg MS/cow on once-a-day. The average for South Otago in a normal year twice-a-day milking is 385kg MS/cow/year.

They’ve decreased cow numbers from a high of 850 and think they can lower them further still while increasing production and profit further.

“We’re wanting a really healthy cow with good fertility and having good soil health and diverse pasture forages is part of that.”