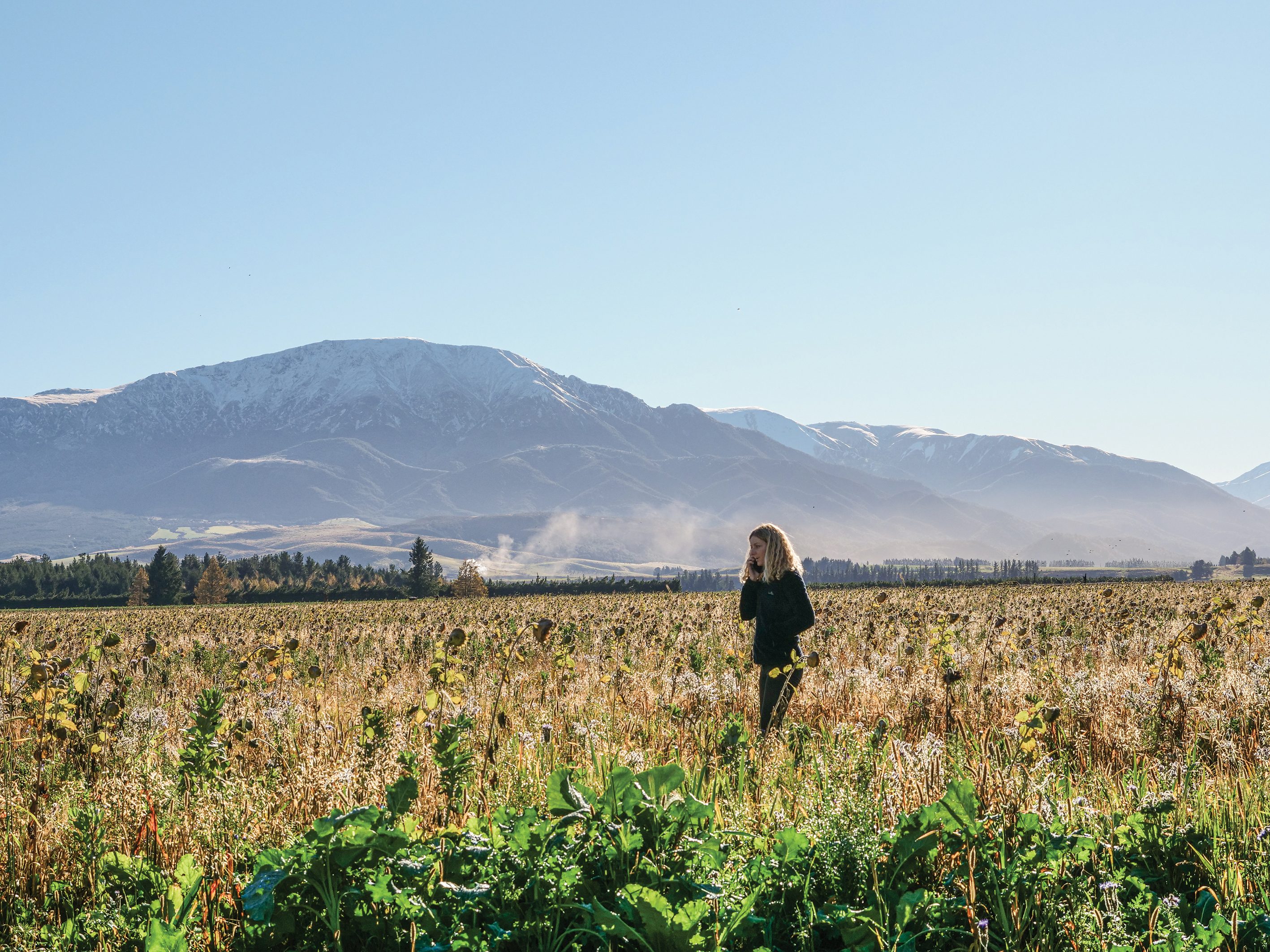 Making a profit from regenerative agriculture is the next priority for Canterbury’s Align Farms. Anne Lee spoke to chief executive Rhys Roberts and head of environment and innovation Clare Buchan. Photo by Holly Lee.

Farms’ budgets for this season show it would need a premium of 20c/kg milksolids (MS) to bring the regeneratively run operation up to par with its conventionally run area in terms of operating profit.

“Based on a $6.25/kg MS payout the regen is about $300/ha less profitable so we’d need that 20c/kg MS premium or we’d need to see other productivity and efficiency benefits like a 10% drop in our empty rate to bring profit to the same level.”

“Even at $900/ha difference I’m reasonably content with this from a trial perspective because the budget doesn’t include any financial benefits we might get in animal health or mating performance from the regenerative system.

“It doesn’t take account of the environmental benefits we’re getting either. We’re using very low bought-in feed and no synthetic nitrogen on the regenerative side.

“But it’s important to note we’re content with it as a trial at this stage – if this was put across all dairy farms in New Zealand, it would knock about $1.5 billion out of the country’s economy.

“This further illustrates the importance of taking a laser focus to the financial performance of this trial.

“We cannot lose sight of the importance of profit to a farming system remaining sustainable.”

Even though he’s ok with the additional cost, particularly at the $300 difference based on the longer term payout he says he would be happier if it was $300 ahead not behind.

“I feel like we won’t get too much interest from conventional farmers until we’re ahead so we either have to get some value for what we’re doing or see some improved efficiencies if this is about where we end up.”

This month Align Farms kicked off the first full season of its comparative study running half its Clareview farm using regenerative practices and the other half using conventional practices. Longfield farm is transitioning and is expected to join the trial next season.

On Clareview that means 148ha is now established in diverse perennial pasture species, no synthetic fertiliser and a pasture grazing regime that sees higher covers and residuals and more frequent shifting of cows.

Farm working expenses are significantly lower on the regenerative area at $4.12/ kg MS compared with $4.42/kg MS due mainly to lower fertiliser and supplementary feed costs.

to use 223kg/cow of grain as a bought-in supplement was one that sparked some good debate across the whole team including the board members and others they sounded out.

“In the end we decided to keep some supplement going into the regenerative side this season with the view we’re likely to be able to phase it out in coming seasons.”

There was also some debate about the higher stocking rate on the conventional farm but Rhys says it’s realistic given the type of system they have been running.

No urea or synthetic nitrogen is applied.

The Dairy Exporter will be taking a deeper dive into the fertiliser regimes at Align later this year.

“We cannot lose sight of the importance of profit to a farming system remaining sustainable.”

Getting facts and data

Rhys says the budget has been set based on the typical costs they’ve run in previous years so the proof will be in the actuals spent.

“We’ve just divided our animal costs per cow for instance so there’s no difference in what we expect in terms of the budget between both sides.

“It may be that we see a reduction in animal health costs on the regen side and then again it could be higher.”

That’s what the study is about – getting the facts and data and then reporting back, he says.

Clareview has been transitioning to the diverse pastures and different fertiliser regimes over the past two seasons and in the last season Rhys says there was a notable improvement in somatic cell count (SCC).

“Typically, we see a bowl shape in our SCC graph so it starts high, drops and then climbs again at the end of the season but this year it started out as usual and dropped as we expect but it didn’t rise again.

“We’ll be tracking the animal health data this season very closely with the cows all fitted with Allflex collars.”

They’ll be able to monitor rumination and other health indicators and reproductive indicators using the collars and reports they generate.

“We’ll be able to compare rumination for instance between the two systems but we’ll also be able to see what’s happening compared with cows on our other farms going on and off other crops.

They’ve seen differences in water use with up to 40% less irrigation water going on regenerative paddocks at times last season.

“We’ve split the budget evenly for irrigation power costs in the budget but again we’ll see what the actuals show in terms of difference, if any, this season.”

Rhys says they had confidence in setting the budget based on some of the learning from last season.

“Pasture production on the regenerative side kept up with the conventional side to date but we have noted that while there were no real differences at peak growth times in the season we did see some differences that surprised us a bit in the shoulders.

“There was slightly reduced performance in the regenerative diverse pastures in the shoulders, particularly in the autumn which went against what we thought would happen.

“What we’re asking now is whether that’s a soil fertility thing, or a diverse species thing, are we grazing at covers that are too high or are we grazing them down too low.”

Align Farms is also testing out a regenerative wintering system on its 497ha effective support block, Hinterlands, near Mt Somers.

Although it’s dryland, in late May it was anything but, with the South Branch of the Ashburton River taking a detour across swathes of land in the Canterbury floods.

In January 77ha had been sown in diverse pasture and forage crop species but ironically the summer/autumn drought had taken its toll on both the diverse species and a late kale crop sown in January.

“In the end, although it wasn’t good it wasn’t as bad as we thought and both the diverse forage and late kale yielded 7t DM/ ha when they were measured in May.

“Kale sown in November had also been drought affected but it came out at 12t DM/ha.”

“I think we’ll find that we should have had the mix 60:40 brassica to cereals in favour of the brassicas but it’s the other way around.”

It was direct drilled into a barley crop that had been taken for cereal silage.

It wasn’t sprayed out before the diverse crop was sown and they did get regrowth from the barley.

“We would have preferred the cows from the regenerative areas of the dairy farms to be solely grazing the diverse crop but because of the lower yield they’ll be on kale until July.”

The questions they want to answer from the diverse winter forage is whether it will regrow, how well it can regrow and can they get a second grazing out of it.

Cows will be strip grazed and back fenced.

Align Farms head of environment and innovation Clare Buchanan says they’re aiming to carry out mineralisable nitrogen monitoring which may indicate how well the diverse crop and its regrowth can soak up excess nitrogen and act as a catch crop.

They’re also trying bale grazing one mob of cows on one of the diverse paddocks.

Bale grazing is a regenerative practice where bales of meadow hay are positioned throughout the crop.

Rhys says they’ve purchased 158 bales with about 10 bales put into each break on the diverse crop.

“So there’s a lot more hay than you’d normally put in with a crop and it’s just left out there for the cows to push around, eat, lie on with the aim to get them eating it but also spreading it around and transferring nutrients.

“I’m not sure just how commercially sound it is but we’ll trial it and see what we find out.”

Cows on kale will have a wintering diet of about 11kg DM/cow kale and 3kg DM/ cow ryegrass straw while cows on the diverse forage outside the bale grazing trial will have a diet of closer to 8kg DM/cow forage and 6kg DM/meadow hay.

Having the Allflex collars will allow rumination times for cows on the two forages to be compared.

“It is exciting to be underway with this first full season of the study – we’ll have a lot more data and experience to share from now on.”

Align Farms has been working with Ata Regenerative to carry out an Ecological Outcome Verification, Align Farms head of environment and innovation Clare Buchan says.

Monitor paddocks have been assessed for a wide range of indicators such as biodiversity, soil biology and soil chemistry and based on scores it’s determined whether the paddock and soils are deemed to be regenerating or degenerating.

The programme was developed through the Savoury Institute and is affiliated with the Land to Market programme – a regen­erative verification programme connecting consumers with food coming from regen­erative farms.

Clare says it involves both short and long term monitoring carried out annually and every five years respectively to assess the outcomes of farming practices.