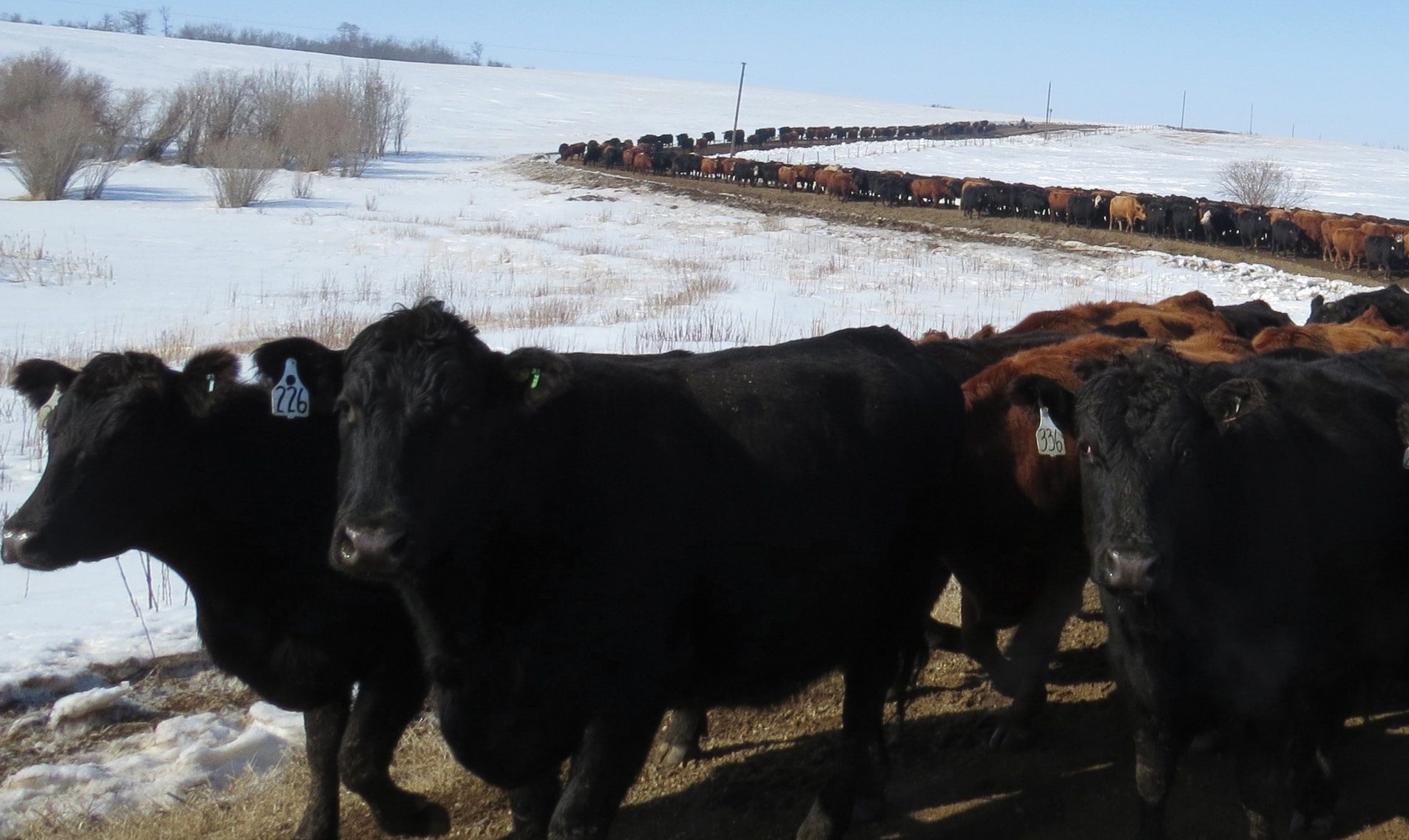 Canadian-based Kiwi farmer Ben Stuart is used to people looking at him like he’s a bit nuts.

Grass finishing beef cattle in Saskatchewan? With winters that last six months? You’ll never do it with those American Angus genetics!

But where there is challenge, there is opportunity. Taking note of changing consumer demands along with the increased environmental and social expectation experienced in other countries, Ben is setting up his grass-fed beef farming systems to take advantage of changing global dynamics in food production – in particular pasture-raised, non-antibiotic, non-hormone beef.

Originally from the Wairarapa, Ben, his Canadian wife Sian and children, Ava and Sullivan, are in partnership setting up an 8000-hectare farm near Yorkton in south-eastern Saskatchewan for grass-finishing beef. They also oversee another 8000ha farm 800km away at Hardisty, Alberta, which Ben managed for 10 years.

‘Our big thing has been trying to keep production low cost to where we are competitive at a commodity level, and if we can get a premium for it and establish another market then that’s kind of a win-win.’

Together the farms run about 3000 Angus breeding cows, retaining all their own progeny and finishing 500 head on a grass-fed contract. Along with the cash crop component, total carrying capacity will increase over the next few years with further development.

An entirely grass-fed farming model similar to a New Zealand system is markedly different to the way most cattle operations are run in Western Canada. Typical operations are somewhere between traditional ranching (extensive pastoral grazing) or intensive feedlot finishing.

While Ben is not against feedlots, the environmental implications of condensing a number of animals over a small area and the cost of supplementing feed for extended periods prompted him to look at alternatives.

“That’s why we have taken a different route – I can see more pressure coming on the traditional systems because of changing consumer views around animal welfare and environmental pressures.

“But because we are still raising and selling beef, any negative perceptions are going to affect us, even if we are using different production practices.

“So whether it’s Canada or NZ, it’s important we highlight the positive attributes of beef and livestock production, no matter what system we produce them in.”

Ben has brought in NZ genetics from Pinebank and Waigroup Angus in the Wairarapa to ensure increased feed efficiency and quicker finishing on grass. North American Angus are specifically bred for feedlot finishing, meaning they are larger and take longer to mature.

“Winter feeding is by far the biggest expense in the Canadian beef industry. We need to make sure we have efficient cows that can handle the pressure, and when killing at a younger age it’s important we get the finish and grade on them.”

In order to fill a 12-month grass-finished supply, they start killing at 18-months and no older than 30-months. Steers are targeted at 600kg-700kg finished liveweight.

“Mad cow disease (BSE) had a huge impact on the Canadian beef industry in 2003,” Ben says.

“One of the stipulations after that was all graded animals need to be slaughtered before 30-months of age. The price drop between graded and non-graded is huge, so we have a select window to make things happen.”

They’ve found it difficult to get traction supplying their grass-fed beef through existing companies, so the plan is to market it themselves.

“We can see the market for grass-fed is there,” he says. “We’re seeing a bunch coming in like Aussie imported grass-fed. If we can produce it here, most retailers would sell Canadian over imported, as long as price wasn’t out of whack.”

There’s an existing natural, non-hormone, non-antibiotic market they sell into, which offers a small premium over commodity and is traditionally for grain-finished beef.

“Our big thing has been trying to keep production low cost to where we are competitive at a commodity level, and if we can get a premium for it and establish another market then that’s kind of a win-win.”

KEEPING THE WEIGHT ON

The extreme winter conditions is the biggest challenge on the farm.

“We can have six to seven months of winter, and you don’t get compensatory growth [like you do in NZ] when they go to grass after their winter feed programme.

“In order to hit that 18-months [killing] age we’ve got ensure we are putting weight on these cattle from the day they are born, right through that winter period. That’s the trick to make sure they are growing.”

He says despite temperatures that can reach -45C with wind, they’re fortunate it stays dry.

“The cattle can actually still put on weight when it’s that cold, as long as they have shelter to get out of the wind. In NZ you have a dirty southerly, and it might not be cold but it’s wet and windy and miserable with mud everywhere, so there are some advantages.”

Winter feeding includes swath grazing, where crops are cut with a windrower and then just left in rows under the snow and break fed. The cows will dig through the snow to feed.

“We can harvest some pretty good quality here and then it’s basically like putting it in a freezer, and it keeps really well under the snow in that form.

“We can cut it down in October and it will still be almost as good as the day it was cut in February/March, so that’s kind of unique.”

Traditional ranching in Canada sees cattle set-stocked all summer with minimal pasture management and no real renovation or development programmes.

“One of the challenges in the cattle industry here is no one is making any money running cattle on this land,” Ben says. “When you look at the economics of ripping it up and seeding canola, you are better to, so that’s what is happening.”

He says traditional ranchers may be lucky to make C$40(NZ$47)/acre, whereas a cropping farmer seeding canola may net C$200/acre(NZ$583/ha).

“While that’s not really comparing apples with apples, if the cattle guys intensified a little bit more, rotated cattle and spent a bit more on management they would get a whole lot more production out of it.”

Ben is doing exactly this in the cattle operation, taking what was reasonably high-producing grainland at Yorkton and seeding it down to lucerne and grass.

“We are going to intensively graze it and in five years’ time, we’ll break that up and cash crop it for two years, and that is our pasture renewal and cash crop rotation.”

He says some cropping farmers are seeing the benefit in this type of diversification to spread risk. The cropping cycles are always up and down. They are on a lull with the cropping at the moment and farmers are looking for other ways to make revenue.

“There are a few guys looking at adding lucerne to their rotations and making feed for a couple of years and then going back into crop, and that’s what we are doing and advocating.”

MIXING IT UP TO MINIMISE RISK

Ben is partnered into a seed company called Union Forage that’s importing seed out of NZ and distributing it across Canada. He says his winter feed strategy is not that different to how it’s done in NZ, bar seeding a number of mixed species.

Very seldom are they seeding a monocrop.

“We’ll throw in oats, turnips, rape and ryegrass, seed it altogether and grow a pretty diverse blend, then keep our cattle out there grazing.

He’s even been known to throw a few sunflowers in the mix just to give locals something to talk about.

“Seeding a whole bunch together means one thing is going to thrive no matter what the season does, if it’s dry, we’ve got some cereals in there.

He says the more diverse the better.

“We have a short growing season with only one chance to get it right so we need to be resilient.”

He says the economics on this system work favourably compared with the traditional option of silage or greenfeed for 180-200 days a year, particularly in Saskatchewan.

“When guys are feeding cows for three dollars a day and we can do a cow and calf for under a dollar, it just makes sense.”

Ben’s actively followed the evolution of the Kiwi farming system over the 12 years since he left NZ, and he’s been working to adopt many of the environmental principles into his systems. He expects environmental regulation will be met with resistance in parts of Western Canada.

“I think British Columbia has been a bit more proactive on adopting environmental practices while the rest of Western Canada, the prairies, has been a little bit more ‘Wild West’,” he says.

“If we can fence off waterways and riparian areas, then people are going to come and look at us as a model. We’re not going to get that pressure [from provincial regulators] if we’re proactive, whereas if we dig our heels in, they’ll make us do three times more because we are not wanting to play by the rules. We want to lead the way, as we can see the benefits for such practices.”

Looking to the future, he says increasing land prices making it non-competitive to run livestock will remain a headwind for the beef industry.

“It’s a tight margin game over here. If you are looking at traditional cattle feeding and the feedlot system, it’s economies of scale you need. The big guys are the ones that are hanging in there, the small guys with 6000-head feedlots are battling. [That] sounds like a lot but it’s not – you’ve got to be 20,000 head-plus.”

“But if you are prepared to do something different you can probably make money, which is kind of the way we look at it,” he says. “We are going against the trend.”

Ben says in an industry where sourcing good labour is increasingly difficult, they’ve been fortunate to employ a number of New Zealanders over the last 12 years.

The count is now more than 70 Kiwis from managers to seasonal positions.

“Each have left their mark and we certainly wouldn’t be where we are today without their efforts and input.”