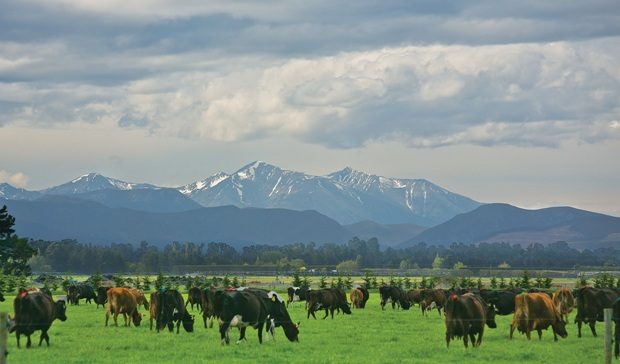 A study is underway at Back Track Dairies to see if seven years of following the Albrecht Kinsey approach to soil fertility has made a difference to the soil’s ability to hold on to nitrogen and potentially reduce leaching.

Lincoln University senior lecturer in animal sciences Dr Racheal Bryant is carrying out the study with the help of the Ministry of Primary Industry’s Sustainable Farming Tere Fund.

The 1270-cow Back Track Dairies, between Methven and Ashburton, is owned by Jeremy Casey and Kim Solly along with the Murney family.

It’s made up of two dairy farms – one on each side of the road.

In 2012 Jeremy and Kim had an increasing interest in alternative fertiliser regimes and when they converted both units they saw the perfect opportunity to look more closely at the Albrecht Kinsey approach by running a comparative study to see for themselves if there really were benefits.

On the south side of the road is the 155-hectare, 542-cow Whakapono farm, which uses the Albrecht Kinsey approach while on the north side of the road, the 210ha, 724-cow Waiora is run under a conventional fertiliser approach provided by Ballance Agri Nutrients.

The Albrecht Kinsey advice is provided by Don Hart of Top Soils.

Other than the fertiliser regimes both units have been run under the same management systems since conversion with staff also moving between the two to ensure no bias. 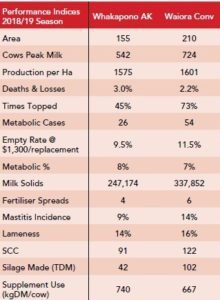 Lincoln University, Plant and Food Research, Macfarlane Rural Business, Dairy Cow Monitoring and DairyNZ have all been involved in carrying out data collection and analysis.

The study by Racheal will look at the distribution of nitrogen, in all its measurable forms, down the soil profile following a simulated urine application which was carried out in late May.

Total carbon will also be measured and she hopes to also be able to measure cations potassium and sodium along with anions sulphate, phosphate and chloride.

Overseer-modelled nitrogen loss figures have been similar over recent years for both farms, apart from last season when nitrogen fertiliser was increased on the conventional farm.

Racheal’s study wants to investigate what is happening in reality to autumn applied urinary nitrogen and if, as has been suggested, the Albrecht Kinsey managed soils are retaining nutrients more successfully than conventionally managed soils.

Core samples at various depths down the soil profile will be taken from the monitored plots with the first samples taken just before the urine was applied to give a baseline reading.

Samples will be taken four more times through the winter with the last just before cows return to the paddocks in spring.

Results from other measures over the past seven years show there has been no significant differences in milk production or pasture production although the Albrecht Kinsey farm, Whakapono has used less nitrogen – typically 40-50kg N/ha/year less – and grew more clover.

In 2017/18 he pulled the rates closer together, dropping the conventional application rate and found more clover production.

But this past season Jeremy increased nitrogen use to 167kg N/ha on the conventional Waiora farm – the same level used by Lincoln University Dairy Farm while Whakapono received 92kg N/ha.

As expected the amount of clover dropped on Waiora but the Overseer loss rates increased significantly above those of Whakapono.

Jeremy says while it might be disappointing for Albrecht Kinsey proponents that Whakapono isn’t outstripping Waiora on production or profit stakes he finds it “quite outstanding” that in an intensive system like his nitrogen rates can be kept so low on Whakapono and it can hold its own with the conventional system.

Other trends have emerged in favour of the Albrecht Kinsey approach with Whakapono soils home to more soil biology in the form of both good and bad critters.

Animal heath trends too have also been apparent with Whakapono cows having a lower incidence of metabolic problems at calving, although for the rest of the season it’s more variable.

Frequently reproductive performance has been better on Whakapono in terms of three-week submission rate and empty rate.

Operating profit has been similar over recent years although there has been criticism that in the early years the Albrecht Kinsey approach called for a much more expensive fertiliser regime and that extra cost has not yet been recouped.

Don points out though that soil testing using the soil tests appropriate for the Albrecht Kinsey method show the nutrients added in those early years are not lost and are showing up in the soil tests.

He also believes the additional trace elements apparent in the soil tests are showing up on farm and could be responsible for improved animal health and reproductive performance.

“I think we’re in a good place with this because we’re getting very similar production, the profitability each year is similar but we’re doing it with less nitrogen so the environmental effects are lower,” Don says.