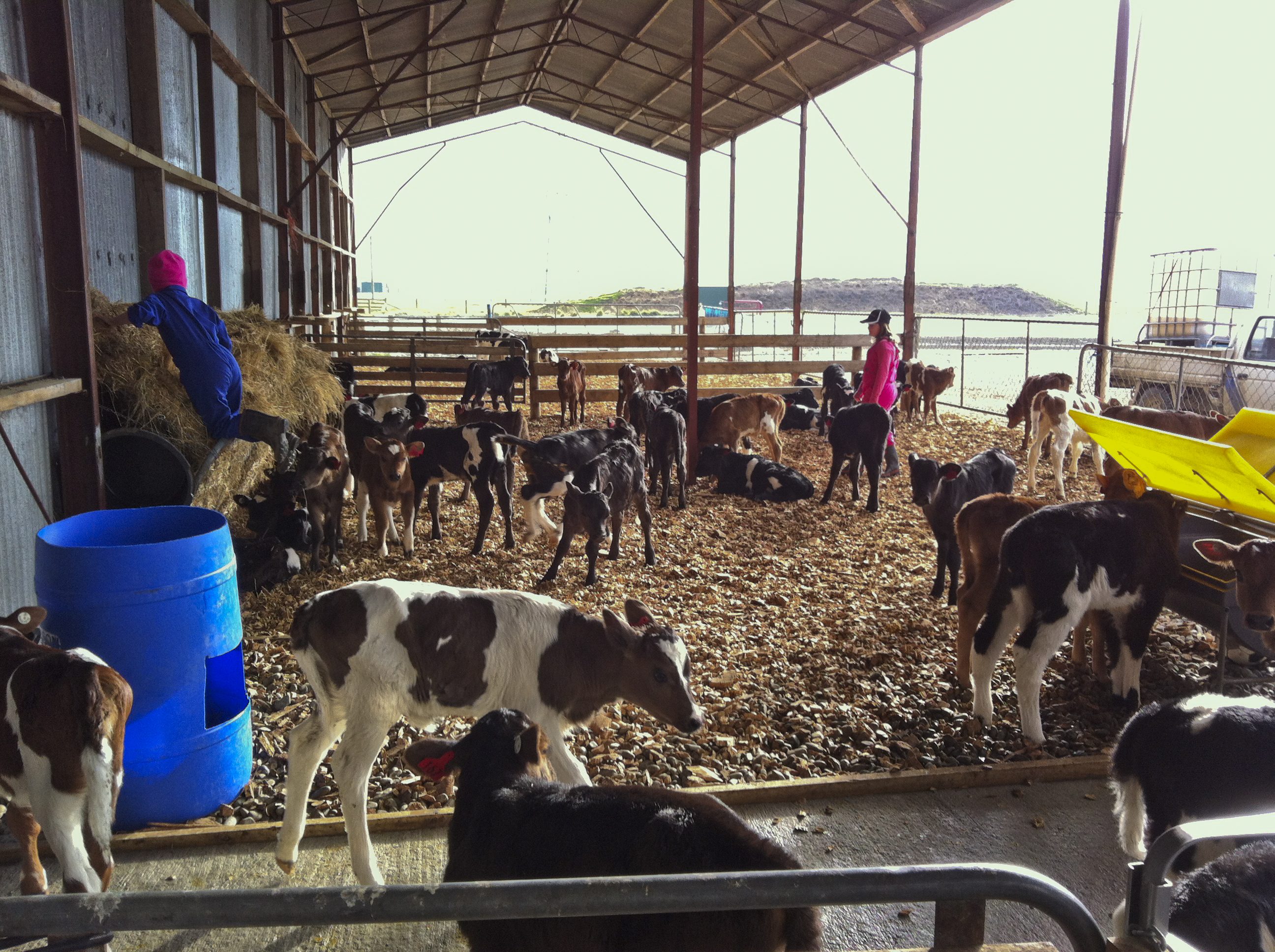 Suz Wyborn was pretty happy with her calf-rearing system.

A busy mum and Canterbury sharemilker milking 850 cows together with husband Joe, she’d refined her system so she could rear more than 200 calves and come out the other end of calving in one piece and sane.

So she admits she was pretty sceptical when she was asked to trial locally developed automatic calf feeders.

“I took on three but I kept my own system running as well so the shed was split half and half. What I was doing was working well and I just wasn’t sure these machines were going to be for me at all.

“In the end, though, I had to admit the calves on the auto-feeders were better calves,” she says.

When it came time to make a decision over whether they’d buy them or have them taken out she bought them and three more.

Now all their replacements are fed on the machines.

The auto-feeders use electronic identification tags (EID) and an EID reader in the race of the machine, where the calf stands to feed, to identify the calf and dish out the programmed amount of milk.

The computer, which operates the system and is located in the calf shed, allows a valve to open and lets milk flow to the teat in the machine until the calf has had its allotted feed.

Once the milk stops flowing the calf gets the message there’s no more to be had and backs out.

“If the calf comes back in within a certain time the computer says no and the calf won’t get any more milk. It’s amazing how quickly they learn they can’t come back in too soon.

“We even had one calf come in for a feed just before midnight, back out and then come straight back in because we have the feeders set on a certain amount of milk and number of feeds in a 24-hour period that rolled over at midnight.

“It pretty much got two feeds in one,” Suz says.

They were dubbed Handy Calf Feeders because of an association with Timaru farm machinery business owner Gordon Handy, who together with his niece Felicity are also distributors for the machines.

Suz says she doesn’t put the calves straight on the machines but trains them to drink on conventional calf feeders.

By the time they’re four or five days old and they’re racing to the feeder I transfer them out of their pen into an area where they have access to one automatic feeder that’s just for the learners.

“I do it in the morning after they’ve been fed on the normal feeder. I plug their numbers into the programme on my phone so the computer knows they’re there and how much milk they should be getting and how often.

“Then I leave them till the next morning. I can check on the computer at home before I come up to the shed if they’ve had a feed or look at my phone or the computer screen when I get to shed.

‘We even had one calf come in for a feed just before midnight, back out and then come straight back in because we have the feeders set on a certain amount of milk and number of feeds in a 24-hour period that rolled over at midnight.’

“In the majority of cases they will have worked it out and had a feed. Out of 220 there might be five I have to spend time on to really get them used to it.

“Most of the time it might just be pushing them up to it once and then they’ve got it. On the really rare occasion there might be a bit of a bully amongst them that tries to get past them or push in but I’ll move that one out pretty quickly into the next area where the bigger calves are on two feeders.”

Suz sets the computer to give young calves four litres over a 24-hour period and increases that to six litres over time.

She sets a six to eight-hour delay between the first and second feed depending on the age of the animal.

“I was a once-a-day girl because that’s what worked for me and the calves did fine with that but once we had the auto-feeders I could make it twice-a-day. It didn’t mean I had to spend any more time at the shed and I think the calves did better for it.

“I’m not trying to push them into having one big feed at the time I want them to feed. They can choose when they do it now.

“Most of them feed at night – from 3am to 8am the machines are really busy, so by the time I get there in the morning they’ve almost all had a feed – some of them have had all they get for the day.”

Calves have access to water and ad lib and calf muesli mixed with a barley feed mix that includes coccidiostats. It’s crushed and mixed onfarm by a mobile service.

Milk for the automated system is pumped from the calf milk vat at the farm dairy via an underground pipe.

The calf shed is just 20 metres from the dairy and the system means, apart from colostrum and milk for calves being trained, all of the second, third and fourth milking milk gets to the shed with a flick of a switch.

The underground piping isn’t just for milk, it can be switched to bring a hot wash or acid wash to the calf shed too, allowing the milk line to be cleaned as well as the tank at the rear of the shed and the lines to the auto feeders.

The feeders sit on a concrete pad with a 4m x 10m concrete apron out the front of each set of three feeders.

The wash line and water line are set up so that Suz can clean the concrete areas down each day too. The washdown runs to drains that then head to the effluent system.

Suz says calves hang around on the concrete before and after their feed for a few minutes and it’s there that they’re most likely to let their own waste go.

Because she can wash it off it’s not carried through the adjacent pens and wood chip bedding, helping keep that cleaner.

The auto feeders are in the centre of the calf shed with two rows of three that are back to back.

Suz says she starts out the season on one side of the shed using just three feeders until that side is full before she moves on to the other side.

Each auto-feeder can handle 40 calves comfortably so each side of the shed can accommodate 120 calves.

Suz and Joe are big fans of monitoring and using information to drive their management practices so they achieve the outcomes and goals they’re after.

The calves are weighed and that information also recorded in the system that comes with the auto feeders.

“We’re very keen weighers,” Suz laughs, “but seriously, how are you supposed to know where you’re at if you don’t do that?

“We have to have all our calves off by December and we don’t want to be sending any underweight calves to the graziers. If we don’t weigh them until November we don’t have time to do anything about dealing with anything that’s not on target.

“If we start back in October and know our target weights we can take action.”

Suz can set up groups on the computer based on their weights and allocate that group a specific feeding regime.

As soon as the weather warms up in August calves from about two weeks and older get access to the outdoors and lanes behind the shed that take them to grass paddocks.

There’s a separate lane for each side of the shed and calves can come and go from the paddock to the shed and the auto-calf feeders at any time up until they’re weaned.

One of the biggest benefits of the auto system is time and therefore labour saving but it’s also set up to minimise heavy lifting and be as simple and efficient as possible.

Last calving Suz had a back operation and she and Joe have really worked to make the system minimise the load in every sense.

Suz can rear the calves on her own if need be and while she says it’s still a very busy time through the peak of calving it’s not as busy as it would be if the calves all needed to be manually fed.

“It gives me more time, even at that peak period, to keep an eye on the calves themselves. I can see at a glance if a calf hasn’t fed or if something’s up by looking at the computer or on my phone and there are alerts that you can set too.

“But it also gives me time to walk through them and observe – when you’re flat out feeding you’re just on the go.”

Once they’re through that peak and all the calves are on the feeders Suz says the time savings really come into their own.

Some days I can be up at the shed for just half an hour. I can look at the computer over breakfast and see if there’s any calf I have to deal with – most of the time there won’t be – so then it’s just a matter of going up there and making sure their feeders (grain feeders) are topped up

Based on their calf numbers and labour savings Suz and Joe calculate the payback period is five years on the machines.

Calves are picked up twice, sometimes three times day depending on the weather and put on to a purpose-built pen that’s on the front forks of the tractor.

The whole pen is lowered to the ground in the paddock and because one full side of the pen is a gate that can be opened back, the handler can carry calves right into the pen without having to lift them over a rail.

The calves are tagged and have their navels sprayed when they’re picked up.

The calf pen is lowered to the ground again when it’s brought to the calf sheds so the calves can again be handled easily without lifting them over the sides of the pen.

Suz sprays their navels again and every calf is tube-fed warm, colostrum from first milkings.

“They get that gold colostrum straight away. Everything gets it, the bobbies get it too.”

The bobbies are kept in pens separate to the main calf-rearing shed and are fed milk on conventional milk feeders until they’re fit to go.

The replacements and any beef-cross calves in the main shed are fed warm colostrum milk from the second, third and fourth milkings while they’re being trained on to conventional calf feeders.

Calves have 24-hour access to water through that time.

More time to have fun