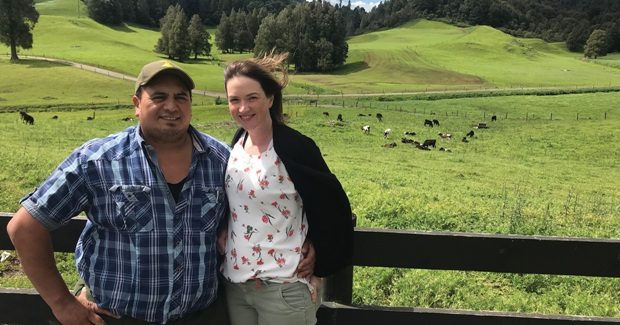 After six years of lean management, Vaughan and Apolline Komene are still learning and adjusting their system which is the true definition of lean – to have continuous improvement. Sheryl Haitana reports.

Apolline admits she is a lean management fan, and probably a lot more excited by it than most.

“It’s empowering to implement a system that works.”

People who want to embrace lean on their farm should be aware of the workload that goes into it, but the benefits for your team and your business are huge, she says.

Lean management is a management approach aimed at continuous improvement and the elimination of waste. It sets a job standard for each task onfarm, which staff are trained and audited on regularly.

‘Looking at it on paper, it is about continuous improvement – who wouldn’t want that? But I didn’t understand the auditing and all the terminology, A lot of it we had in place, like having daily meetings, but it just wasn’t structured.’

Vaughan is operations manager for FarmRight on two of the company’s managed farms at Aria in the King Country.

He was employed by FarmRight eight years ago to manage the 1000-cow dairy farm and a young stock unit. He has worked his way up to operations manager.

Apolline has a degree in Agri-Commerce and a background working in banking. She has supported Vaughan and has been instrumental in the adoption of lean management, which FarmRight introduced about six years ago.

She studied lean management during her degree at Massey University and thought it was a system with real value.

She has recently started doing external Lean auditing and training for a number of FarmRight Farms on a weekly basis.

When FarmRight implemented lean management across its farms it was a daunting prospect, Vaughan says.

“Looking at it on paper, it is about continuous improvement – who wouldn’t want that? But I didn’t understand the auditing and all the terminology, A lot of it we had in place, like having daily meetings, but it just wasn’t structured.”

The first core skills introduced onfarm was the creation of Job Element Sheets, together with Job Instruction, and Problem Solving.

The job element sheets include people, machinery, pasture and cows which are all variable and it is a lot of work. It involves breaking down critical tasks into steps, and like any new systems there is a lot of learning along the way.

“You can’t job-instruct bagging a cow like you can maintenance on a tractor – they’re very different tasks, so you need flexibility and to think outside the box,” Apolline says.

“One of the key learnings that came out of the process, is the importance  of involving your team in the creation of standards, one reason being, it helps develop the Lean culture, and another being you can capture their knowledge.”

“Once you have that foundation the rest of the system can

fall into place, provided you keep building on it,” Vaughan says.

“We are forever finding gaps in the system and standards.

The adjustments we make are huge.”

There is a lot of work involved with Lean and to continue you have to start with something you believe in, Apolline says.

“You have to start with something you’re passionate about, for me that was developing staff capabilities, focusing on that gave me the motivation I needed to understand and grow our Lean systems.”

“Focusing on something you are passionate about will be how you find the willpower to commit to all the work you have ahead of you.”

“Without focus, I believe it would be too overwhelming.”

For Vaughan, he already believed in a daily meeting and knew the benefits of having one. The adjustment was incorporating the Lean process into the meetings and taking his staff along on the journey.

The team culture is everything when it comes to lean being incorporated successfully in a business.

“When you’re learning Lean, you’re so wrapped up in learning and understanding the tools, it is easy to overlook the importance of the lean culture, but for it to work, you need both, and mastering that balance can be really challenging,” Apolline says.

“That’s what I like about it. You’ve set a standard and you’ve given the chance to explain and show staff the safest way and the most efficient way.”

The job element sheets give incredible autonomy to the staff as well, Apolline says.

“There is nothing worse than when you start a job and you have to ask the boss something for the fifth time. They can take charge of their own success.”

If a person is continuously not meeting the standard it’s the same as when a person in a sports team keeps dropping the ball. Everyone knows they’re dropping the ball, whether it’s said or not – it’s best to get it out in the open and find out what the cause is.

Auditing is a key part of the process which finds any gaps in the system or staff capability. Auditing can come across as negative, but it’s actually coming from a positive place, she says.

“We are auditing the standard, not the person.”

For example, they will audit a staff member in the farm dairy on plant washing standards. Are they recycling the hot wash at the correct temperature? Are they wearing PPE gear? Are they ensuring all cups are washed correctly?

Apolline gives the auditing report to the farm manager, which the manager can then take back to the daily meeting to discuss any challenges or issues that arise.

It can be hard for staff not to take it personally when it’s pointed out that they aren’t meeting a standard, but it’s important to remind staff that it’s about continuous improvement and making sure the standard is correct. It’s important they don’t take it to heart and sort it out as a team – and that comes back to having a Lean leader who is positive.

“It’s always a positive chat, it’s reiterating that I’m not picking on them,” Vaughan says.

“Why aren’t you checking the cups during the wash? This is the standard you’ve been trained to, is there a reason why it’s not working? Is there a problem with the standard?”

The work they do in their farming operation is above and beyond the industry standard, he believes, but for large farms Lean is a great way to get a team culture and standard in place to ensure efficiency and ultimately safety.

For smaller farming operations, there are elements of the Lean system that would work, but the process is suited to a large team.

“It’s harder with less people, it’s hard to audit yourself or one staff member.”

A huge component of Lean is completing an A3, which is the strategic planning for the year.

A lot of work goes into condensing all the information from a season on to an A3 piece of paper to identify the gaps in the system.

Putting the information together makes it measurable and it’s black and white.

For example, last season, they identified that they didn’t harvest all of pasture they should have which equated to a gap of 1.27 tonnes drymatter/ha contributing to $1100/ha of potential income lost. The farms are run as a low cost DairyNZ System 1-2 so pasture is king. The next step for Vaughan and Apolline was to problem solve why pasture harvested was below target.

They identified some direct causes to the gap: Pasture energy levels could be improved through grazing lower residuals; having slightly faster round lengths to eat lower pregrazing covers; calve cows at greater condition score, and grow more grass with additional drainage and fertiliser.

They also identified a gap in staff capability, so they created more standards around strengthening the pasture allocation process. Vaughan has given every staff member their own platemeter and there is a map for measuring each paddock.

The couple are focused on reducing that gap this season and continuously improving their operation.

“FarmRight are great to work for. We love developing staff and these farms, together with Lean management systems, allow us to do that,” Vaughan says.