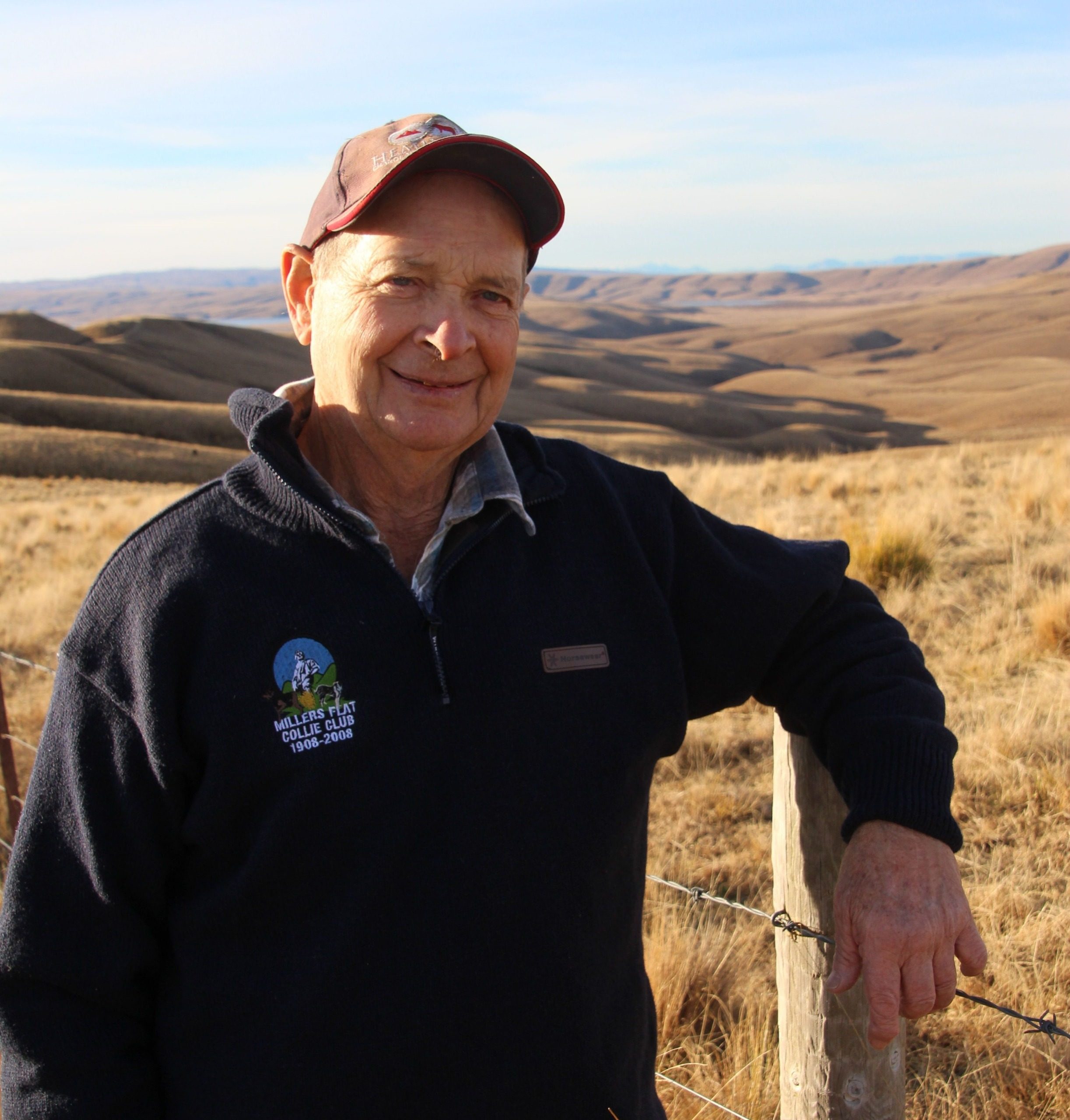 Avenel Station farmer Pat Garden has planted his property in Maku, a variety of lotus, and is reaping the benefits. Lynda Gray finds out why.

Pat Garden admits he has a "patch over one eye".

That’s when it comes to Maku, a variety of lotus pedunculatus, but he understands why the scrambling clover-like perennial has never gained a huge foothold in hard hill country.

“There’s no seed available; it costs a lot and it’s difficult to manage so why would you grow it…but there’s always a place for a fanatic,” Pat said at a Central Otago Farming for Profit afternoon.

At the event, on the Garden family’s Avenel Station, Pat and son Nick talked about why and how they’ve persevered with the legume in their harsh hill country, and how they plan to integrate its summer growth into their wider farming system.

The family’s first experiment with lotus was back in the early 1980s during the era of Land Development subsidies. Pat was farming in partnership with his brother Eoin and the pair decided to trial the legume on 400ha of undeveloped hill country, in the hope of increasing drymatter production.

“We got the bare seed and inoculated it on a shed floor with a gum Arabic paste that we mixed up. We shoveled it on the seed which had to be flown on immediately,” Pat recalls.

The growth was spectacular over the first few years, but the cost of maintaining and sustaining the block with fertiliser became prohibitive once government funded land development incentives were ditched from the mid-1980s. Development of the hill country went on the back burner but was revisited after the equitable splitting of Avenel between Eoin and Pat’s families in 1990. In 2000 Pat oversowed some of the area with white clover and 2t/ha of lime. The initial growth response was encouraging but within 18 months the clover had failed due to the high levels of soil aluminum.

“I realised then that lime wasn’t an economically viable solution on our high hill country and that’s when I went back to lotus.”

Now, Avenel has 550ha oversown with lotus in seven subdivided blocks. It’s a harsh and unforgiving environment ranging from 700-900m asl with low fertility soils in the 4.4-5.0 pH range. The first block of 350ha was established in 2014 and followed by 200ha in 2018. Another 170ha will be flown on by helicopter at 2.5kg/ha over the next couple of years.

The success and persistence of the legume is due to grazing management and a long-term “system approach”, Pat explains.

“To make it worthwhile you need a decent area so that you can rotationally graze it, allowing sufficient time for recovery. The high tannin levels in lotus means it takes about a week for sheep to adjust to the taste so it’s important to plan for mobs to spend sufficient time in the lotus area to make up for that initial pause in liveweight gain.”

The blocks are grazed by rising two-tooth ewes pre-Christmas and used as back-up grazing for mixed-age ewes during dry summers. Cows and calves also graze it once the growth takes off.

The young ewes transition from the lower lying homestead paddocks to the high country from the third week of November. They’re rotated through the blocks from mid-December. Stock is moved on and off the blocks according to residuals; they go on a new block when the lotus is about 250mm high and come off when it's grazed down to about 60-70mm. Care is taken to avoid rank and woody growth which sheep won’t eat. The grazing pressure comes off during February to allow the build-up of energy reserves and the spread of rhizomes. Rotational grazing with two-tooth ewes continues in March before weaned cows move in during April to graze the remaining covers before the plants are frosted.

Within Avenel’s oversown lotus block are two AgResearch trial sites. The precursor to these was a conversation at the 2014 NZ Grasslands conference between Pat and AgResearch scientist David Stevens, who are both long time members and former presidents of the association. Pat asked David about fertilizer rates and grazing management for a newly established block of lotus. He also quizzed him on how to use and integrate the legume to greatest effect in the wider farming system. The discussion led to the trial work and was the catalyst for a Sustainable Farming Fund project called ‘Legumes in the high country’. It investigated the potential for legumes in low fertility hill country sheep and beef farms.

Avenel’s trial comprised caged areas in two sites. Growth along with rainfall and temperature were measured over time, and the sites harvested in late spring, summer, and early autumn to get an understanding of the pasture growth profile and stock growth rates. Another trial looking at the nutrient requirements and response to lotus from phosphate and sulphur showed that neither resulted in a significant production response. A further trial is investigating whether grazing pressure affects longevity.

Measurements over three years estimated an almost fourfold increase in drymatter production from the undeveloped state, and average daily liveweight gains of 135 grams in lambs and 750g in yearling cattle.

The estimated cost of establishing lotus was $300/ha (seed, oversowing, fertiliser and fencing). Pat thinks that $500/ha is a more realistic figure because it includes the subdivision and applications of fertiliser in the previous years to create a suitable growing base.

The AgResearch project delved deeper than liveweight gains and drymatter produced. It tackled the bigger question of how best to integrate the increased feed into the wider Avenel system to make more money, while lowering costs and the environmental footprint. At the Central Otago Farming for Profit day David Stevens said the approach often taken with an increased feed supply is to add more breeding stock. With that comes more mouths to feed over winter and more crop which in a rapidly changing regulatory system could create onfarm environmental issues. Stevens said the challenge was to move away from that traditional thinking and harness the unusual properties and opportunities from the new legume country.

Farmax was used to model three alternative beef and sheep scenarios, comparing them with Avenel’s existing system and based on the assumption of oversowing 276ha with lotus to provide extra summer feed.

Options of lotus use

How: Increase the number of breeding ewes by 200, with no change to crop area, cattle policy or lambing percentage.

OPTION 2: A shift from sheep to cattle to spread enterprise risk.

OPTION 3: Shift away from breeding stock to lamb finishing.

For each option, the estimated changes to pasture cover, animal production, costs, expenses and profitability were calculated as well as the resilience during extreme summer conditions. The results in ‘Can lotus pedunculatus over-sowing in low-fertility tussock country increase farm resilience?’ (Journal of New Zealand Grasslands 82 (2020)) concluded that tilting the enterprise from breeding/finishing to more finishing had several advantages: fitting the lotus growth profile; reducing winter feeding costs and potential environmental issues; and the opportunity for a flexible stock buying and selling according to seasonal conditions.

It’s a system Nick and Pat are working towards, but exactly what it will look like is still under discussion.

“Whether we’ll trade Merino lambs or something else we’re not sure…there are choices to be made,” Nick says.

It will be a step by step transition and as a start they’re looking at new forage crops that might lead to a reduction in the winter crop area.

Avenel’s feed crunch time is from August until October, spring growth is often slow to kick off and at the same time paddocks are taken out of the grazing system for cultivation and crop establishment. A possible solution could be autumn established Moata and rape which as well as filling the early spring feed gap would be direct drilled, therefore avoiding the potential environmental pitfalls of cultivating soil.

“At this stage it’s a trial to see how and when we would graze it, and the amount of regrowth,“ Nick says.

The new chapter of development at Avenel is exciting and due largely to the success of Lotus which has improved the protein content of the hill country pasture and changed it from relatively unproductive to productive land capable of finishing stock.

“It’s given us new opportunities and potential income. Our challenge is to integrate it for the benefit of our wider system, within our own operational framework and incoming environmental regulations.”

Seed production and availability is an ongoing problem; corniculatus is imported and there is very little if any available, but there are good stocks of the E-Tanin variety and possibly Trojan, Wayne Nichol PGG Wrightson agronomist says.

Another limiting factor is achieving a pure seed crop, free from white clover which will very quickly smother out lotus.

“It’s crucial that sowing rates factor in the purity and certified germination percentage. It’s also important that it’s inoculated with the correct strain of rhizobia.”

On Avenel Station pedunculatus is grown because it copes better with the moist and acidic soils. It has high tannin levels making it less palatable to sheep and cattle, but Pat says a lengthy transition over about 10 days overcomes that problem.

In contrast with corniculatus, pedunculatus spreads by rhizomes.

“That’s a huge positive in such a harsh environment where seed production is compromised by inadequate pollination,” Pat says.

He bought the entire New Zealand supply of lotus pedunculatus for the 2014 development, paying $42/kg for viable seed, then inoculating it on the floor of the woolshed. The seed for the 2018 development was inoculated and pelleted by Prebble seeds.

Overseeing the financial, planning and budgeting side of Avenel Station is a second-string job for Nick.
His primary place of employment is the NZX in Auckland where he is the derivative manager. He works with dairy farming clients around the country advising them on how they might use derivatives to mitigate risk.
Nick, an economics and information science graduate, worked in financial analytical roles before managing Avenel Station from 2011 until 2018. He then took on the NZX role, moving to Auckland with wife Aimee and their children Isla and Fyfe.
He keeps tabs on the financial side of the farm business and says that the seven years of hands-on experience has given him good practical insight when it comes to budgeting and planning.
He visits Avenel about every six weeks and between times has fortnightly video conferencing updates with farm manager Angus Ross. The addition of Angus and Fiona (Angus’s wife) to the Avenel team in 2020 has been crucial to the success of the remote working arrangement. Internet-based diaries, plans and budgets also help keep everyone up-to-date with farm happenings.
“People often say I have the best of both worlds. It’s not always easy juggling everything but it’s really rewarding.”