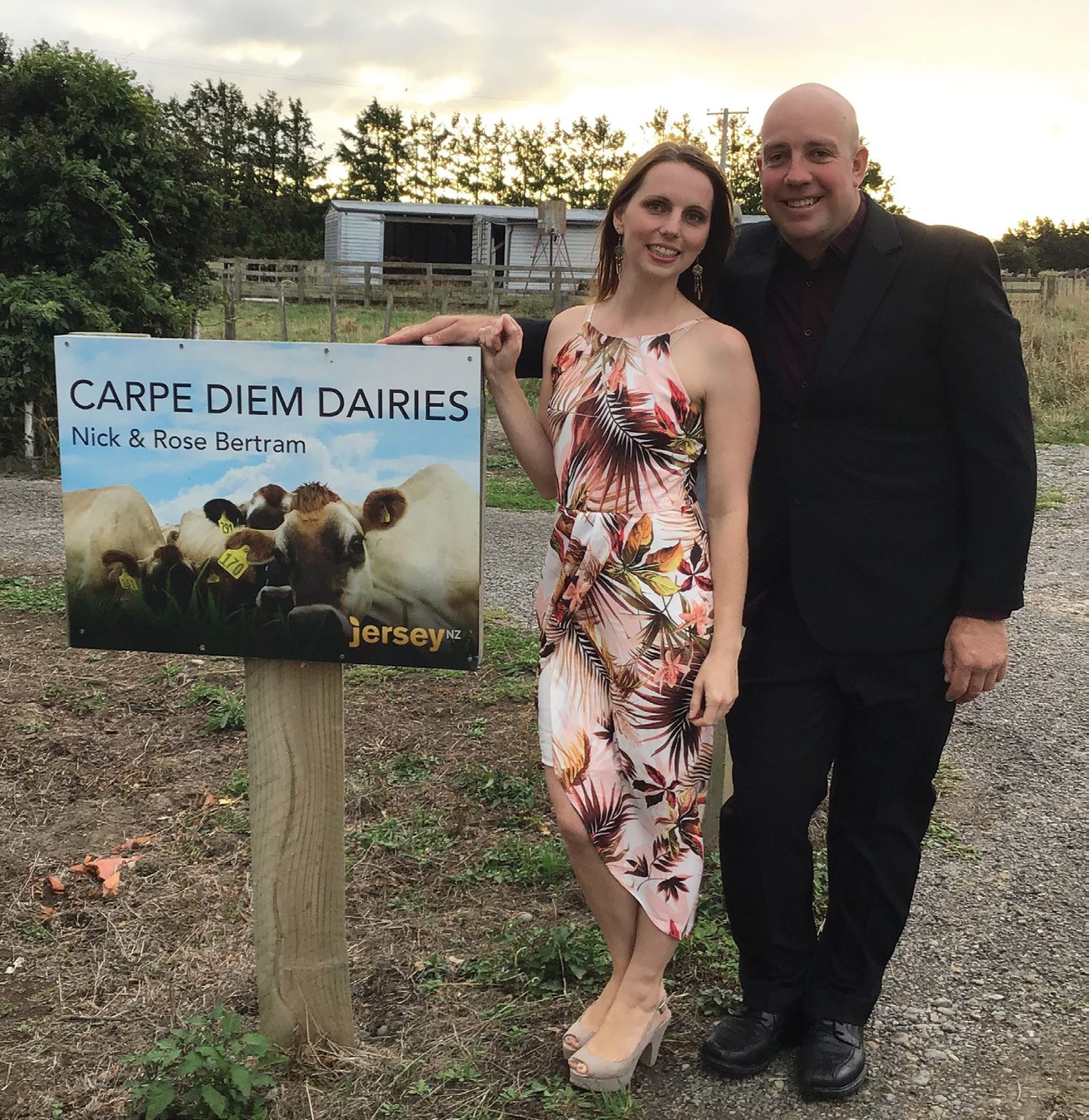 Nick and Rose Bertram have had such a dry summer they have had to dry off the cows on their Woodville farm a full eight weeks early, in the first week of April.

“This is the earliest I have ever had to dry-off but we have been really smashed by the drought this summer.”

The couple were named Hawke’s Bay/Wairarapa Share Farmers of the Year for 2020, in the same week as he made one of the hardest management decisions of his career, but with no supplement left and very little grass growth, it’s a decision he said he had to make for the good of his cows and their production for the 20/21 season.

“I am really production and profit-driven, but I have to look after the cows – I know I’ll thank myself for this decision next spring.”

Nick is a passionate ‘grass and cows’ farmer – with strengths in pasture management, breeding and feeding, talents that won them the LIC Recording & Productivity Award and the Ravensdown Pasture Performance Award among others.

Nick and Rose, aged 33 and 27, have been 50:50 sharemilking for Barry and Carol McNeil for the past three seasons on their 150-hectare, 440-cow Woodville property. 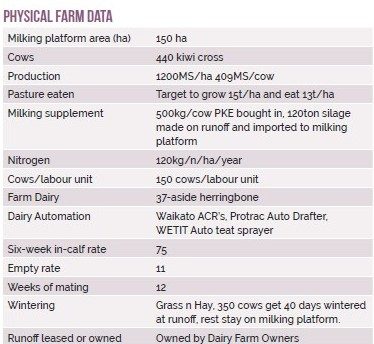 They arrived with 100 cows and 50 heifers of their own and when they had put the rest of the Kiwicross herd together the BW averaged 40. It’s now sitting at 80 and the first of their homebred heifers are about the enter the herd with an average BW of 160 and the R1s are averaging 190.

“We have made that genetic progress by only keeping replacements from the top 2/3 of the herd and using AI over our heifers too.”

Nick is passionate about selecting and nominating a bull team to use over his best cows, saying that he choses bulls he likes with the best fertility, capacity, milk production and longevity (good feet and udders).

“I want a herd of 450 crossbred cows producing their own liveweight in milksolids year-on-year for eight lactations – that’s my ideal,” he said.

“It’s early days for our programme, but I breed the top 2/3 of the herd to the nominated team and this year I have 105 heifers – 80 to enter the herd and 25 to sell – so the fertility is there.”

The first three weeks of AB the nominated semen is used, then week 3-6 all cows get Wagyu semen and weeks 6-12 everything gets short gestation crossbred semen and all AI is done in 12 weeks.

“I want to breed fertile cows so we use

no bulls and no intervention – we have a tight calving with a 75% six-week in-calf rate – last year using the short gestation semen only 38 cows were due in the last six weeks of calving and only one cow in the last three weeks.”

The bottom third of cows are inseminated with Wagyu semen and calves are contract reared to 90kg and sold to First Light Beef.

The Wagyu calves are worth more than the surplus heifer calves and putting 120 cows to the Wagyu is a great boost to the stock income, Nick says.

“As sharemilkers we get to keep 100% of that income so we want to maximise it.”

Nick and Rose have bought a small block for their young stock and are building calf sheds there this year to rear the Wagyu calves. The plan is to build their own home on the small farm the following year and in seven years be in a position to buy a 400-cow farm of their own.

“We will reassess at that stage whether we want to buy our own farm or continue sharemilking – but I will definitely be dairy farming until all the children leave home,” he laughed.

Nick and Rose, an early childhood teacher who hails from the Australian wheat belt, have five children. Nick has a 12 year old daughter and the pair have four boys who are 9, 4, 2 and 1.

Part of an incredibly busy household, Rose works as an early childhood co-ordinator for local Tararua Education provider REAP, and runs a Mainly Music preschool programme, plays the tenor horn in the Dannevirke Brass Band and is studying for a Diploma of Agribusiness management.

Thankfully, they have an au pair from Germany who helps out with the children.

Nick is a Wairarapa boy, Taratahi-educated and well-travelled, working on farms in the United Kingdom, United States and numerous Wairarapa dairy farms over the years. He volunteers in the local fire brigade and represents sharemilkers for Tararua Federated Farmers and on the Federated Farmers National Executive.

He is enthusiastic about the Federated Farmers dairy apprenticeship scheme and says recruiting his latest team member as an apprentice was a much more positive and successful way to employ a young person into their business.

“We got way more interest in the position and I think it shows a more serious and long-term commitment by a farmer because you are undertaking to train and support an apprentice for a number of years. We also reimburse for courses our team pass and with a 10 on 3 off roster the team get seven earlies and three sleep-ins.

“This it’s the first season we have employed two team members and it gives us all more time off and has meant we can rear more calves and be more profitable.”

Pasture management has always been a strong focus for Nick, who is proud of his zero-topping record.

Instead he says his cows are trained to eat pasture down to the correct residual and if they don’t eat it they know they are going to go back after the afternoon milking to finish the job.

“They go back in the evening until the residual is met and then are shifted into the new paddock – production usually lifts because they eat more and get shifted more often.”

“If we do it after the morning milking they complain but in the evening they are quite happy to go back in – we don’t lock them in but just open the gate and let them move onto the fresh paddock when the job is done. The sugar levels have had time to go back up by the evening and the cows have more time overnight to finish eating out the paddock.”

He is very happy with the 14.5 tonnes drymatter (DM)/ha he is growing on the non-irrigated pastures and has a target to grow 15.5t DM/ha/year.

Whole farm soil testing has helped as a strategy to grow more grass, applying variable rates and different kinds of fertiliser is made possible by knowing exactly where the need is, particularly with lime placement.

Cropping has not been an option on the farm because of a buttercup problem in pastures and the absence of a spraying option that can kill buttercup but not other forage plants like plantain.

“This area is usually autumn safe but we have had two dry autumns in a row so we are going to try a chicory and fodder beet cropping programme – the plantain is not feasible as its too susceptible to buttercup spray.”

Each year 10% of the farm’s pasture is renewed through a grass-to-grass programme using Bealey (now known as Viscount) and Nick also does some direct drilling of an annual hybrid into the sward to give it a boost, particularly if a new paddock is looking a bit thin.

“As I do my farm walks I am always assessing what the sward looks like and planning what needs to be done.”

The couple have enjoyed working with their farm owners to implement their Tiaki farm environment plan, saying the McNeils encourage them to develop the farm as if it is their own and support them with the budget to do so.

Tiaki has helped them identify areas of work and to prioritise the actions and spending, seeing two riparian areas fenced off and planted last year with 500 plants and a further 500 to be planted this year, Rose said.

Work has included widening waterways, creating nutrient traps and working on the most sensitive areas first has been informed by the experts helping them develop the plan.