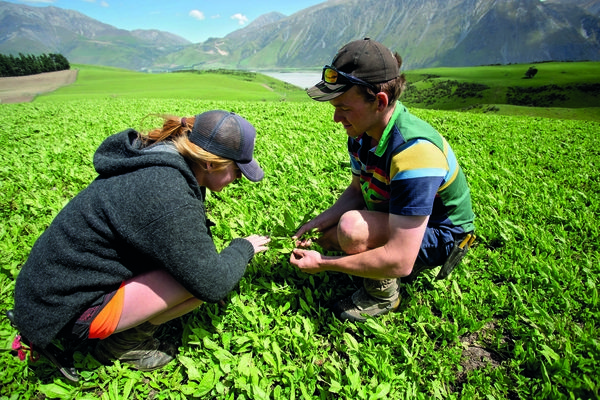 Carey Pawson-Edwards’ career path is about as far removed from his urban upbringing as it is possible to get.

The 19-year-old, who grew up in Christchurch, is about to step into a shepherd’s role on Mid Canterbury’s Coleridge Downs Station in the spectacular Rakaia Gorge having completed the two-year cadetship programme on the same property.

Carey admits it is a big step up for someone so young, but says he has worked hard to get where he is.

Being offered the role is a reflection of his self-motivation and a maturity beyond his years.

Not growing up on a farm, it was visit to an uncle’s farm in North Otago’s Danseys Pass that opened the then 12-year-old Carey’s eyes to a career and a lifestyle a world away from city life.

He returned to Danseys Pass every school holidays and when he was in year 11 and 12 at school, he was able to gain NCEA credits in agriculture by attending a National Trade Academy training facility on the outskirts of Christchurch.

While Carey’s parents are not from a farming background, they encouraged their son as he embarked on a career in agriculture and were right behind him when he applied for a position on the Coleridge Downs two-year cadetship programme.

He was one of 15 applicants vying for just three positions – and was selected – so he left school at the end of year 12 and moved up to Coleridge Downs at the end of the following January.

Almost immediately he was given an essential tool for his trade in the form of a heading dog pup which he was taught how to train. Six months later he bought a broken-in Huntaway.

Carey explains that the Coleridge Downs cadetship programme is very practical and the cadets are essentially learning on the job.

One day a fortnight is dedicated to theory and they spend the day in a classroom on the farm. All the cadets are studying Primary ITO agricultural courses and while they have the ability to do these in their own time, the classroom is an opportunity to learn, discuss and complete their assignments.

Carey says in the first year the cadets work alongside the second-year cadets and farm staff, and learn the ropes in stockmanship, fencing, driving tractors and all the other day-to-day tasks that make a farm business tick.

In the second year, the cadets are given a degree of autonomy (or they will work alongside the managers) and learn how to carry out feed budgets, measure crop yields, drill paddocks and take responsibility for mobs of sheep, cattle and deer.

“That second year is quite a shock. It’s a big step up in terms of responsibility and it gets everyone thinking.”

Carey says he enjoys every aspect of the job, particularly the variety of work that occurs on hill country sheep, beef and deer farms.

He says while Coleridge Downs is a training farm, it is also a high-performing business which strives to be in the top 10% of similar properties in everything they do.

“They are always keeping up with new innovations such as being involved with Headwater’s Omega Lamb programme.”

“The Primary ITO programmes really work well because they relate to what we are doing on the farm.

“They are really relevant and enjoyable.”

Now out in the workforce, he is continuing his study and will be undertaking a Primary ITO level 5 course in production management.After gaining experience as a shepherd he would like to step up to a stock manager’s role and ultimately become a farm manager. To ensure he has both the practical and academic skills required, Carey is keen to continue to study agribusiness and farming technology – essential knowledge for this generation of farm managers.

Set to be a farmer

Briar Swanson was always going to be a farmer.

Growing up on Totara Peak Station on the shores of Lake Benmore in the Mackenzie Country, Briar spent her childhood out on the farm horse-riding and helping her stepfather with farm work.

During her secondary school years at St Kevin’s in Oamaru, Briar was able to begin building her career pathway by doing Primary ITO courses in agriculture. In Year 10 she did introductory level agriculture and then in Year 11 and 12, completed NZQA level 1 and 2 papers.

In year 12 her study was complemented by practical work on Buscott Station once a week.

That year she applied for and was awarded a place on the Coleridge Downs cadetship programme, a farm she was drawn to because it was similar to Totara Peaks.

Having just completed her first year on the programme she says she has learnt many skills.

“When I came here, I thought I knew the basics, but now I have done that first year I can’t believe I have learnt so much.”

Like Carey, Briar enjoys the huge variety of work across the three different farms which are part of the wider 42,000 stock unit Coleridge Downs business.

This ranges from typical hill country through to intensive management under irrigation. As each of the farms is run under slightly different management styles, the cadets gain insight into how different farm systems work. Briar says she has always enjoyed the theory side of farming, particularly as she has been able to apply it on farm at home, on Buscott and recently on Coleridge Downs. She’s found the husbandry papers she has completed through Primary ITO to be particularly valuable.

As she goes into her second year, Briar will be based solely at Coleridge Downs and is looking forward to taking on more responsibility and helping teach the first-year cadets.

She is particularly looking forward to being joined by another female who is one of the three first-year cadets.

She admits she has found it challenging being the only female cadet and while the men have been really good to her, she feels as if she has to push herself that bit harder to keep up with the physically stronger males.

Once she has finished her cadetship, Briar is hoping to get a shepherding job in the high country – possibly around Omarama – before working up the ranks of head shepherd and ultimately a manager’s role.

Coleridge Downs general manager Tony Plunkett was instrumental in setting up the training farm having identified a gap in the market when his son was leaving school and seeking a hands-on farming cadetship.

He says while the North Island had Waipaoa and Smedley, the only farm training available in the South Island was Jeff Farm in Southland.

All these farms were difficult to get into, with large numbers of eager school leavers – typically hands-on learners – vying for limited spaces.

It was Tony’s colleague Sarah Barr and a training adviser for Primary ITO, who convinced Tony that Coleridge Downs
would be the perfect training farm and in establishing the cadetship programme, Tony was fully supported by the farm owners, the United States-based Erdman family. Tony says without their support, it would not have happened.

Where Coleridge Downs differs from the other training farms in that they pay their cadets a salary, so they are essentially part of the farm business. A resident cook supplies all the meals which ensures all the cadets are well fed and cared for, and the cadets need to abide by a set of rules around where they can go and what they can do outside of work hours.

“They are our workforce and that’s the difference between us and the other training farms,” Tony says.

Coleridge Downs also employs training provider Kristen Hubbard who travels to the farm two days a fortnight to help the cadets with their Primary ITO courses.

“The courses really suit us. They are in booklet form and it’s very black and white about what the cadets need to do to complete the course.”

Kristen relates the courses to what is happening on the farms during the course of the year, so it is very much applied learning.

Now in its third year, Tony says they are constantly evolving the cadetship programme and learning as they go. In the first year the cadets work across three different farms and in their second year they are posted to one farm for the whole year, although they will help elsewhere during busy periods.

“We find this works well as the cadets get to know the property and become a valuable part of the work force.”

For Tony, the cadetship programme harks back to the education he received when he was an 18- year-old straight out of Northland without any farming background.

He worked on several large-scale sheep farms where the staff took the time to teach him the skills which paved the way for a successful career in the sheep and beef industry.

“What we’re doing is turning back the clock but fine-tuning it to meet the needs of agriculture today.”

A cadetship open day is held on Coleridge Downs in July every year.

Visit www.primaryito.ac.nz to see the full range of qualifications available to learn while you earn.