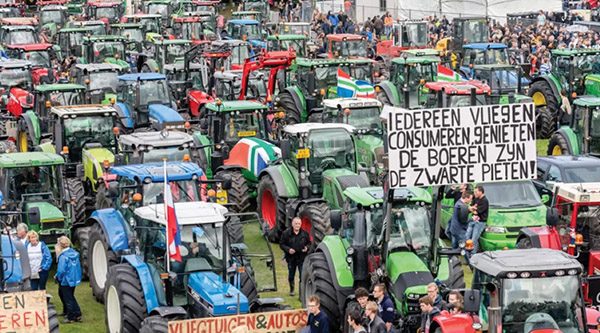 Farmers across the world are jumping into their tractors and setting off in convoys to cities in order to make their voices heard. For too long now farmers have had to go along with whatever wacky decisions their governments have bestowed upon them, but that attitude has changed dramatically recently and it’s no more Mr Nice Guy.

As words fell deaf on politicians’ ears the Kiwi farmers did what their European counterparts have become used to and that meant a tractor trip to the city. French farmers are the world professionals of protesting as they ensure the French government, the European Commission and the public feel their anger. The EC insists its farm support subsidies will only be distributed if farmers comply with tougher greener environmental agriculture, provoking a revolt.

In the city of Clermont-Ferrand, more than 2000 protestors flattened street lights with their tractors and spread manure on the streets after the government announced it was going to tax the use of nitrogen fertiliser and increase organic production. At the end of 2020 Dutch farmers converged on The Hague protesting against policies to reduce nitrogen oxide emissions.

Effectively, this meant a cull of farms in some regions. In India more than a million farmers took over the capital Delhi in protest over new farm acts passed by the government. Sadly over 400 farmers have died during those protests.

Whether farmers like it or not new policies on the environment will continue to tighten the rules on how they carry out their work. However, governments need to understand that no farmers means no food! • Chris McCullough is a UK journalist.