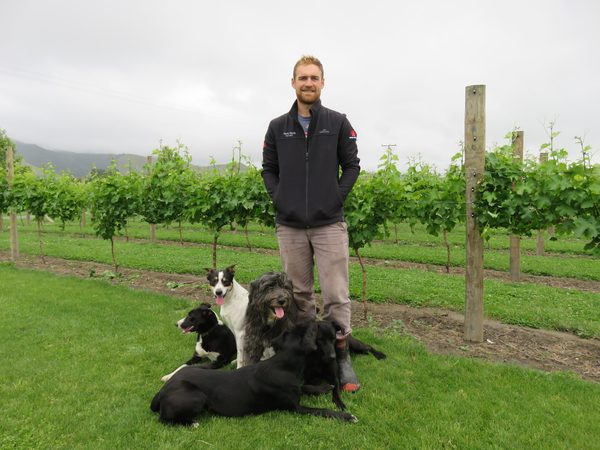 Now they grow grapes and finish 3000 trading lambs over the winter on Park Farm, north of Blenheim.

Freddy Gane, 26, says the vines of Sauvignon Blanc, Chardonnay, Pinot Gris, and Pinot Noir are for the family owned Nautilus and Babich companies who they’ve always grown for.

“Originally we were told we were too wet to plant grapes here, and now we’re part of the Golden Mile of vineyards.”

The Golden Mile has become 10 miles long, and “everyone likes to think they’re in it”, he says with a chuckle.

Freddy, who now manages Park Farm for his parents, was born after the Rogernomics years, which meant the end of subsidies and some very tough times.

His ancestor Samuel Gane set up shop here in 1867, moving over from Somerset, England.

The Ganes were farming sheep and crops before changing to grapes and kiwifruit. Kiwifruit didn’t last long, but the vines took off.

‘We wouldn’t be farming here without two things, grapes and water. Irrigation saved us in those tough years and we are very fortunate to have the Wairau River which catches most of the West Coast rain but flows to us in the east. Grapes have taken us from an undersized cropping farm to a vineyard with some scale.’

“Sauvignon Blanc is king. But we’ve always been keen on different varieties. We’ve got 20ha of Pinot Noir which is great for Rose.”

They run a few sheep, and each autumn Freddy will buy in nearly 3000 lambs for winter.

Close to the Wairau River, the 90ha farm sits mostly on silt loam and is very fertile.

“We wouldn’t be farming here without two things, grapes and water. Irrigation saved us in those tough years and we are very fortunate to have the Wairau River which catches most of the West Coast rain but flows to us in the east. Grapes have taken us from an undersized cropping farm to a vineyard with some scale.”

Freddy enjoys working with the perennial crop these days, and last year he had a bit of a ‘wow’ moment when spraying the low-growing clover in the rows of vines.

“I thought to myself, for over 50 years they’d been trying to grow the clover, and now we’re trying to spray it. It seemed counter-productive.”

He figured that by allowing the clover to grow through the spring and seed, it would eventually out-compete the annual weeds, so no herbicides would be required.

“I would like to get away from herbicides if we can, and fortunately we are in an industry where that is possible. Cropping like we used to just wouldn’t work if you couldn’t use herbicides, so viticulture is one of the few industries where we can remain profitable without them.”

When he’s not busy co-ordinating pruning over winter, Freddy is busy grazing his mobs on various vineyard blocks around the region, as well as keeping up with the usual jobs that go with sheep farming like shearing, drenching and vaccinating.

This grazing system works well. Sheep owners pay a small fee to the landowner, and get constant fresh grass.

“One of the tricks is always being available to shift something, to work in around pruning and things,” Freddy says, explaining that break fences may have to come down at short notice so gangs of workers can access the rows.

“Most of us are from sheep-farming backgrounds or one generation removed, we’ve still got the woolshed and yards here at Park Farm,” he says, adding that he always likes to pick up the handpiece and shear as many of them himself as he can.

“There is little else I’d rather do than beat the sun to the top of the hill in the morning and begin a muster.”

He has six dogs, and often an extra pup or two waiting for a shot at one of the mainstay positions on his team.

So life has to be organised; Freddy juggling work life and dogs, while his wife Nikita, 27, is heavily into her adventure racing and multi sport when she’s not on the vineyard, running the books, or busy with their two pre-schoolers Jonty and Katie.

“Working for ourselves is the best part. Every day is a work day, potentially, and we take time off when the farm allows,” he says.

He tends to stick to dog roll and mutton for daily feeding.

“I have tried all the major brands of kibble, and even at one stage made a spreadsheet comparing protein, fat and main ingredients. I do use Black Hawk Puppy for the pups because it is deemed higher quality and the small biscuits are easy for young dogs to eat and digest. No expense will be spared for that first part of their development as young dogs.”

Training and exercise regimes vary throughout the year, casual mustering taking a back burner during the summer months as the harvest approaches.

“But they do have the impending dog trial season to look forward to. They are run every day and each trained in the training paddock or taken to a hill somewhere to train with friends.”

“I’ve had to find a breed of Huntaway that’s easier to handle and train, but they still need to have plenty of stoke for the trial course.”

A working dog’s condition will fluctuate during the year, in line with the workload.

“We all know a fit farm dog will often show its back two ribs and after a big day’s work they often show all their ribs, but that’s okay – eventually condition will be put back on.

“Our working dogs are the top athletes of the dog world, in all ultimate athletes you will see a few ribs. I hasten to add, though, for bitches conceiving and whelping pups and for pups in their own right, being a bit fat is a good thing.”

The monthly worming of dogs, investing in quality kennelling systems, using dog coats during the winter, and breeding specifically for certain terrains and environments has marked big progresses for dog owners.

“We have the best working dogs in the world, that hasn’t happened by accident. Overall, I think there is a good general standard that most of us intuitively stick to. We care for our dogs on the basis that they do their job. It’s thankless really, but they love it, and that’s what I would want more people to realise.”

Freddy thanks his dad Murray for the way he’s tracking.

“I’ve learned a lot from him, he’s always encouraging me to think for myself and make decisions based on what will stand me in good stead for the future, not just the immediate.”