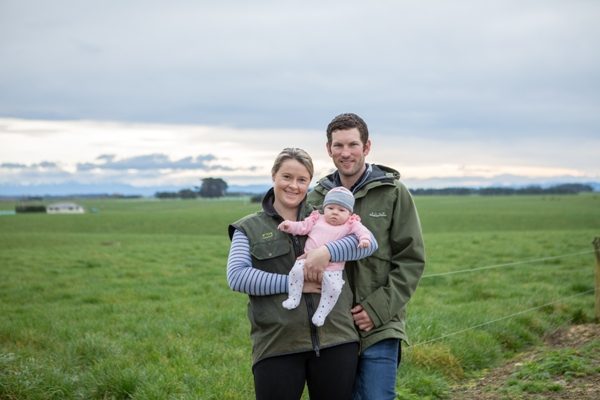 It’s 5am on a mid-August morning and it’s cold and dark – not even a hint of dawn in the sky; the rain’s pelting down.

For most that means wet weather gear, head lamp and bracing for the elements but at Eastbourne Dairy Farm in Southland the staff can just roll over, pull the blankets up and go back to sleep. That’s because variable order sharemilker Ben Worker and his partner Jaime McCrostie start the season milking cows once-a-day (OAD) giving both the people and the cows a gentle introduction to the new season.

Eight o’clock starts and 6pm finishes are the norm through most of August with milking carried out in the afternoon. Ben shared his systems for taking some of the stress out of calving at SIDE in June and says there are numerous benefits for man and beast in not being wedded to a traditional twice-a-day milking interval. In fact, the milking interval varies across the whole season with OAD, twice-a-day and 3-in-2 (three milkings over two days) all used strategically.

Ben’s now in his ninth season dairying and is going into his sixth season as lower order sharemilker on the 164ha property at Thornbury owned by a Roger Dickie Ltd syndicate.

This season he’s also been joined by his partner Jaime with the couple welcoming their first child – daughter Gretchen – over Easter.

Jaime was last year’s Southland/Otago farm manager of the year, winning the title while managing the 930-cow AB Lime dairy farm near Winton.

One of Ben’s first dairying jobs was working for his brother who was running a new conversion and it was there that OAD milking was used over calving, initially to take pressure off the system as the development was completed.

Farmwise consultant Jack Ballam was behind the idea and when Ben moved onto Eastbourne, where Jack was also a consultant, he was more than happy to use the same system at Jack’s suggestion.

“It was a wet spring and I was jumping in at the deep end so it didn’t take a lot of arm twisting,” Ben says.

“It’s such a busy time – you’ve still got cows on crop that need shifting, you’re feeding springers, you have new mums and calves, colostrums and milkers so taking a milking out is going to ease the pressure,” Jaime says.

Ben is admittedly up a little earlier than the others checking springers before breakfast and then feeding calves.

For the two full time staff the morning starts at 8am and is spent checking and feeding the colostrums, milkers and springers on the dairy platform and shifting youngstock on crop at the support block about 3km away.

Fences are set up and calves are collected in the morning with Ben drafting out the new mums and feeding the new calves with warm gold colostrum before lunch.

In the past they’ve calved at the support block with cows trucked back daily but Mycoplasma bovis has made that logistically difficult and a biosecurity risk so this season they’ve grown crop on the dairy platform and are calving at home.

After lunch Ben heads back to check on the springers and milking starts at 2pm with the milkers, colostrums and then new mums.

After milking there’s another calf pick-up and calves are fed by 5.30-6pm.

“There’s still plenty to do but there’s a bit more time to do it.

“People are fresher; they’re more attentive and productive and they’re in a lot better mood.

“They’ve had time for a good breakfast, they get a good lunch break and then they’re home at a good hour,” Ben says.

They generally work a 55-hour week with a six on and one-off roster over that initial three-week to month long period.

By December, they’re on a five-on two-off roster although Jaime would love to see it at five and two for the whole season.

The 40-aside herringbone requires three people over the artificial insemination (AI) period so they’d need more relief staff to make that happen.

As the number of calved cows increases through August milking in the afternoon starts to take longer and by the end of about week three Ben switches to a morning milking, heralding the end to late starts for a few months.

“We milk once-a-day in the morning, starting at 5am, for about a week before we switch to twice a day. The colostrums still get milked once-a-day but go twice-a-day once they’re out of that colostrum mob,” he says.

He did try milking all cows OAD for a month no matter when they calved but without an automatic drafting system the time spent tail painting and running different mobs just counteracted the benefits on staff of OAD, took attention away from other aspects of running the farm and definitely didn’t make things simpler.

The penicillin and lame cows stay on OAD throughout the season.

By the end of December, they switch to a three milkings in two days system, milking cows at 5am and 3.30pm on one day and then at 9.30am the following day. It again takes pressure off people and animals and means staff are home by 6.15pm even on the day they milk twice-a-day.

It’s an 8am start on the farm the following day giving them a chance to have breakfast first and tackle a few jobs before the 9.30am milking.

“I found that if that once-a-day milking is at 10.30-11am there’s a lot of time wasted by the time people have breaks before and after milking. It disrupts the day and they’re not that productive.

“If we milk a bit earlier they go home by lunch time and when they come back we’ve got the whole afternoon.”

From mid-April they’re back to milking OAD full time and stay that way till the end of the season.

The benefits of the system don’t just extend to the people.

It’s up from the 90,000c/ml in the previous season but that year they were still using blanket dry cow therapy, and since the winter of 2018 they’ve been selectively treating cows at dryoff.

Forty percent of the herd received antibiotics and teat seal while 60% received teat seal only.

Last August they had 12 cases of mastitis in cows and four in the heifers. Heifers were teat sealed.

“For the first three seasons we didn’t teat seal the heifers and we had 15-18% mastitis but since we’ve been using teat seal we dropped to 5% in the first season and 3% last season.”

Ben doesn’t feed cows any less than he would on a twice-a-day system and says they hold their condition well going into mating even though they are milked twice-a-day through that period.

Over the last five seasons his six-week in-calf rate has ranged from 71-78% and the empty rate after a 12-week mating period has been 7-10%.

Last season they cut mating back to 10 weeks and only artificially inseminated for four weeks.

They had a 76% six-week in-calf rate and a 12% empty rate which Ben expects will improve again this season with later calving cows culled last season.

They also AI’d their heifers.

The bottom 20% breeding worth (BW) cows are AI’d to Hereford. With production ranging from 470-478kg MS/cow over the past four seasons Ben says any production he’s potentially given up by milking OAD probably isn’t significant.

It’s also likely to have been gained back in spades by having cows cycling well and getting in calf early increasing their days in milk.

There’s also production to be gained by not having cows needing to go on to OAD closer to mating because of poorer condition.

At that time cows are producing more than they are during the first four weeks of the season so any potential loss in production from going OAD at mating will be greater. Cows peak at 2.3kg MS/cow/day in early November and by early January they’re producing about 2.1kg MS/cow/day.

The shift to the three in two milking interval sees them only drop 0.1kg MS/cow/day.

“We hold production really well with that one less walk every second day.

“We’re also doing our production from fewer milkings so there are savings there too.”

They start up the milking plant about 480 times in a season compared with 600 if they milked twice-a-day.

That means lower electricity usage, less chemical, less wear and tear on the plant, less maintenance on the lanes and they’re less reliant on relief milkers.

Right about now though a few weeks of 8am starts would be looking good to most people, and cows too might be grateful for one less trudge down to the farm dairy a day with OAD over August setting everyone up for a better season.

“Really there are a lot of benefits and I can’t see a lot of downside at all – I guess the question isn’t why you’d do it but why wouldn’t you?”