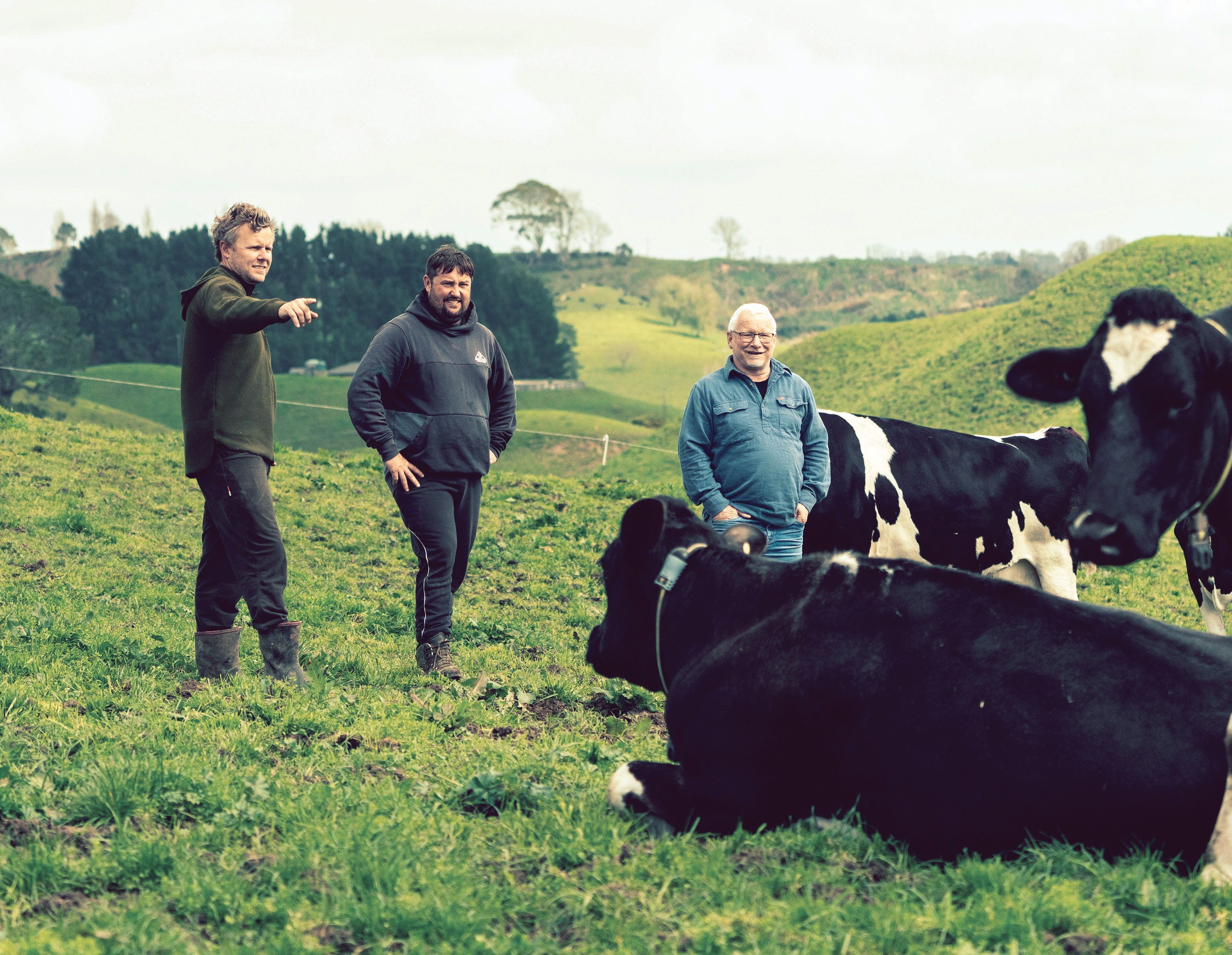 The Scheres family wish they had bypassed sharemilking and cut straight to equity partnerships. The Putaruru-based dairy farmers told Sheryl Haitana about their smooth transition into succession planning. Photos by Emma McCarthy.

Brothers-in-law Paul (Snow) Scheres and Chap Zweins joke about arm wrestling over the family dairy farms, but in reality the blueprint for the succession plan is already settled.

Jack and Elizabeth (Tiz) own three farms just out of Putaruru, two are in equity partnerships, one with their son Snow and his wife Claire, and the second with their daughter Ashleigh and son-in-law Chap.

Snow and Claire own 55% of Waiohotu Farms Ltd, while Chap and Ashleigh own 53% of Waimakariri Farms Ltd.

The home farm, Grangelands, is still 100% owned by Jack and Tiz, which will be able to payout Jack and Tiz’s other daughter Nina, who lives off farm.

Jack and Tiz sat down with all the kids when they decided to move to equity partnerships and laid out what was in their wills so it was clear to everyone what would happen.

“When we pass away, we still have this entity (the home farm) which Snow will take over, and my daughter will be able to get her share.

“I’ve heard of instances where the parents pass away and there is just a shit fight. Hopefully there is no way of that happening.”

The kids are the ones driving and growing the business, so it’s appropriate they are now equity partners to build their own wealth and create opportunities, Jack says.

“If you leave it (succession) too late the kids can’t grow their own equity.”

Snow and Chap feel fortunate that Jack and Tiz have backed them into an equity partnership and trust them to make the key business decisions going forward.

“Dad is really understanding and there is no pressure when you’re making tough calls, he always backs us,” Snow says.

Jack and Tiz lent Snow and Claire and Chap and Ashleigh a $1,000,000 interest-free loan to boost their percentage of ownership in the equity partnerships.

By backing them, they’ve helped them into a position where they can financially grow and be able to take opportunities, whether that’s buying more shares or borrowing to follow other opportunities, Jack says.

Having more skin in the game gives them more motivation to keep the businesses profitable, he says.

Snow and Chap can buy more shares at any point or borrow against the entities when financially able. They both earn a wage paid from the entities and get dividends for their shares every profitable year.

The idea to switch to equity partnerships came from their accountants and lawyers.

Chris Spargo from BlackmanSpargo Rural Law and Tony Harris and Callum Passey from Harris & Co pointed out how creating three separate entities for the three farms and bringing Snow and Chap in as equity partners would be the start of a succession plan.

Their rural professionals, including their ASB rural manager, were key in setting the structure up and making it an easy transition, Jack says.

Snow and Chap were both sharemilking on their respective farms until they shifted to the equity structure last season.

The sharemilking arrangement was proving too difficult financially for them to get ahead.

“There was too much advantage to the farm owner on a System 5 farm, so our accountant and lawyer came up with this scenario,” Jack says.

“With sharemilking Snow and I were going backwards,” Chap says.

“The maize bills would kill us, we didn’t have the cash flow. But now the entities can cover that.”

There is risk with sharemilking when it comes to cash flow and having assets tied up just in stock, and a lot of it can come down to timing.

Snow bought cows when there was a record payout, whereas Chap had better timing and bought them at record low prices.

“If we had our time again we would ditch sharemilking. I bought the cows on a high at $8 milk price, the following year it was $4,” Snow says.

Snow had to work hard to get himself out of the hole just in time to borrow again to go into the equity partnership.

The three separate entities keep it simple. Snow and Chap get to run their own farms, so there is no stepping on each other’s toes on a day-to-day basis. Snow also runs the home farm and Chap oversees the 100-hectare runoff.

They work together on the overall farming business, share machinery and have a floating staff member between the farms.

“We bounce ideas off each other. The farms are doing pretty much the same thing so we can iron out practices together,” Chap says.

“We get on really well. If we were not enjoying it (working together) we wouldn’t be growing,” Snow says.

They all use nutritionist Andrew Robarts from JMR Advisory Services. The farms are all undulating, with plenty of steep hills so the use of maize is key, but with their runoff they no longer have to buy in maize.

They used to grow some maize and buy in the balance, but have since bought a maize chopper, together with Jack and Jack’s two brothers who also farm locally. Between the seven farms they grow 250ha of maize, which justified them buying their own chopper.

Jack started his progression in the dairy industry in partnership with his two brothers. The trio grew their wealth together, but when their kids started getting older and going farming it became too complicated.

“We owned several farms together, but it became too difficult to look after our own children. So my brothers bought me out, and they’ve since separated their assets as their children have started coming back to the farms too.”

EPS ARE THE ONLY WAY FORWARD

Equity partnerships in reality are the only way forward for farm succession, Tony Harris from Harris & Co Chartered Accountants says.

Gone are the days when sharemilkers could sell their young stock to pay for the deposit on their first 60ha farm.

“With the value of land and assets now, we think this is the future. It works very well and not just for family.”

Farm owners are able to help their children into the farm business by gifting some of their equity.

“One of the reasons this works is that as you get older and more established you can afford to give away equity, but not cash flow.”

When the EP is first set up farmers can give their kids a helping hand. If the kids want to increase their shares after that they then have to pay market value and raise capital themselves.

The key with any EP is having a good exit clause, and that is no different for family, he says.

When it comes to succession the main goal is to preserve the relationships at the end of the day, he says.

“There is an obligation to all of the children, whether they are on the farm or not. The key is you don’t want to break up any Christmas dinners.”